Chhichhore is a 2019 Indian Hindi language comedy-drama film directed by Nitesh Tiwari and produced by Sajid Nadiadwala. Film starer Sushant Singh Rajput and Shraddha Kapoor as Anni (Anirudh) and Maya respectively as a couple and parent of their only son Raghav.

Chhichhore’s narrative, its heart and soul purely for the carefree college and hostel days that shape lifelong bonds and life lessons. 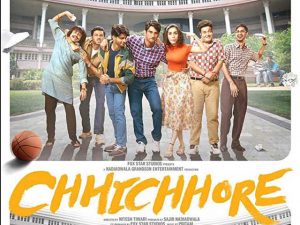 The Story starts with Raghav who was the son of a highly qualified parent and was expecting a clear pass in an entrance exam, but could not and came in high stress and pressure resulting in suicide by him and he got a serious head injury.

To teach his son a lesson and tell him the importance of life Anirudh decided to narrate his college life incidents to him.

He starts narrating his story from the very first day of his college when he got a room in Hostel-D, students of which were famously known as ‘losers’ because of their continuous losses in the college sports program.

There in the hostel, he met Gurmeet and Anil popular as ‘sexa’ and ‘acid’. The story is a detailed narration of Anni’s college life and how he met his friends how he met the love of his life Maya and how they all came closer day by day. To make Raghav believe in their story one by one all (sexa, acid, Derek, Raggie, mummy, and bevda) reunited at Anni’s spot.

They altogether made him realize the importance of life, and no one is a looser. They told him the incident of the sports program arranged in their college and how they fought to win that.

They all united to participate in sports championship and pledges to give their best at any cost. For, all of them even put something on stakes, like Anni pledges to not talk to Maya till they win the championship.

But after all the struggles and scuffle they lost the championship by a single point. Through this they gave Raghav a lesson that doesn’t matter whatever happens life is your first priority.

Sexa and acid being senior taking ragging of the Juniors ( Anni, Mummy) is an attention-grabbing part of the movie. Anni and Maya’s old Hindi type romantic story add a pinch more salt to the salad of college life.

Sushant playing Anni in two different ages from a student at engineering college to a helpless, cating and emotional father has out in all his efforts to make movie worth watching.