Thappad is a 2020 Hindi drama movie based on the domestic violence faced by the ladies in India after marriage and that violence is considered as small family matters, directed by Anubhav Sinha and produced by Bhushan Kumar.

Film stares TapseePannu who is a devoted house-wife named Amrita and has sacrificed her Career and whole life for her husband Vikram (Pavail Gulati) who was mad to complete all his dreams.

Amrita being at her best supported her husband at every step of his life, from early mornings to late nights she devoted all herself to her husband. Vikram too unconditionally loved his wife.

One day in an office party when Vikram’s success seems to move away from his hands, he fought with his colleague and got frustrated. Amrita when tried to resolve the matter, slapped her, and then the story came at a turn.

Amrita’s world came crumbling down when his ambitious husband slapped her in public. There was hell many questions in her mind that. Was that okay?

What she should do now, bare that insult in her heart or stand against this humiliation? Or she should forgive him and brush it off as a small incident? This incident delves upon Amrita to question her life choices and marriage.

Amrita then decides to put a petition in court against her husband to file a divorce. But Vikram continues to think that how could one slap become a life-changing moment for him.

Anubhav Sinha’s Thappad was not only about amrita and his husband but other than the many other women who were bitten and harassed in some way are also projected. 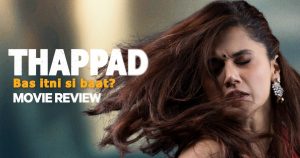 Out which one woman was from the very poor section of society who was daily bitten by her husband and had a mentality that getting thrashed by husband is a norm, one had the idea that marriage is the final destination in women’s lives, one who is bearing the cruelty of family’s name and legacy.

Sinha has managed to include all these stories and had shown them at the right place and with a different cause in every case.

Amrita fought the case against her husband with the complete support of her father Kumud Mishra who stands out for her daughter like every father who is a hero of her daughter.

Amrita not only stands against her husband but against the society who forces a woman bare everything in marriage, who asks a woman that in a marriage ‘sab chaltahai’.Tapsee stands out against the narrow mentality of society.

Tapsee also delivers a cathartic speech in the movie which expresses all the digress that women have to bear when she is sent to another home after marriage, even after sacrificing their lives they have to face such brutalities.

Women are always taught that in marriage ‘sab chalta hai‘ and are living based on the sentence ‘log kya kahenge‘. Tapsee has made the movie worth watching, her expression in every scene shows the hate, aggression, regret, and rage that every woman faces in her married life at least once.

Thappad is a silent slap on our society’s age-old belief that Shaadi Mein sab kuchh chalta hai. But honestly, should it be that way? This is a major topic of concern to think over and change it now.