Set in the aftermath of German occupation, the Guernsey Literary, and Potato Peel Pie Society is a sensual yet quaint story of a writer who seeks herself amidst a group of strangers and their meaningful love for books.

The esteemed director Mike Newell has mastered the whole package of the film, which is originally based on the bestselling novel of the same name, written by Mary Ann Shaffer and Annie Barrows.

Around the context of World War II, he has created a subtle, emotional and intense atmosphere, which is embraced by the extremely talented cast and the brilliant screenplay.

This historical romantic drama takes place in 1940’s England, where the protagonists are stuck between their horrific past and their present phase of shouldering one another.

The young and artistic author, Juliet Ashton (Lily James), who lost her parents to the war, is in the path of figuring out her career with her close friend and publisher, Sidney Stark (Matthew Goode).

She is fascinated to write about people and their stories, which inspire, but is only welcomed to carry out trivial work under a man’s name. One evening, she comes across a letter from a stranger called Dawsey Adams (Michiel Huisman), which eventually changes her life.

As Dawsey draws the picture (in his letters) of his zestful, yet closely knitted book club in the island of Guernsey, Juliet develops a compelling interest in visiting the town and meeting his friends.

Soon she gets to know the faces behind the book club – which was formed only because they had to keep a roast pig meal as a secret from Germans – and forms an unconditional bond of love with them while trying to understand the ramifications of war in their lives.

The more she learns about their stories, the more she begins to feel connected to the island. She finds a soothing sense of familiarity among them. 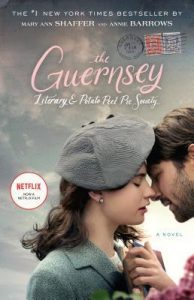 The film has earnestly looked upon its tiniest details – the yearning for social connection, the craving to eat a pork meal which eventually turns into a soulful gathering, a simple act of kindness, the potato peel pie, the bustling Sunday markets, and the magic in books which brings people together – thereby forging all the necessary interiors required for a war based drama. It has encompassed the pleasure of books, the stand for love, the sorrow of loss and the weight of guilt.

The screenplay is the best part of the movie is written in a way that it makes the people rapture the landscape of the island and the placid, extreme long shots of the sea.

“Do you suppose it’s possible for us to already belong to someone before we’ve met them? If so, I belong to you, or you to me. Or me simply to the spirit I found among you on Guernsey.”

“It’s terrible to lose a friend when you don’t have many.”

Lily James who played Juliet, the simple author, falling in love with the islanders, gives an intact performance and never fails to charm the audience with her talent.

Michiel Huisman who played Dawsey sweeps people off with his deep and composed nature, and his chemistry with Juliet is adorable.

The other characters (belonging to the book club and Sidney) have each given a defining performance, especially Isola (Katherine Parkinson), setting a strong tone for their role in the story.

The Guernsey Literary and Potato Peel Pie Society is a definite watch and it promises to take you in a delightful ride filled with love, kindness, and books. You can watch it on Netflix.