Music has always been the most powerful collective expression of human desire and emotion to add a tint of beauty to soul. In India, the origin of music is traced back to the origin of the universe. According to Hindu mythology, the first-ever sound is the Naadbrahma and Tandava of Shiva and Onkar, which pervades the entire universe. It is the purest sound in the Universe and is believed to be unstuck. It is said that sage Narada then introduced the art of music to the Earth from heaven. Origin of music was in devotional songs and was restricted to religious and ritualistic purposes and was mainly used in temples only. This then developed in association with folk music and other musical forms and gradually derived its own musical characteristics. 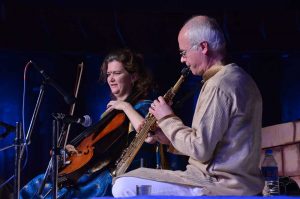 The Tansen Music festival or the Tansen Sangeet Sammelan or the Tansen Utsav of Gwalior, Madhya Pradesh is celebrated every year in order to commemorate one of the greatest singing artists in Indian history, Mian Tansen, the Sangeet Samrat and the Father of Indian Classical Music. He was born as Ramatanu and later came to be known as Tanna. It is said that he could produce any sound. However, it is believed that Tansen was born dumb and was taken to the Sufi saint Murshid Mohammad Ghouse Gwaliari. On reaching Gwalior, he visited the Sufi saint and found him in the company of Swami Haridas. The saint blew air into the mouth and ear of the child and Tanna began to speak and hear. Thus began his musical journey. Tansen was the title given to him by Raja Vikramjit of Gwalior. Tansen was a court musician in the darbar of Raja Ramachandra of Bandavgarh. Later on, he was made one of the Navaratnas (Nine Gems) and graced the court of Mughal Emperor Akbar. He composed many Dhrupads on Ganesha, Shiva, Parvati and Rama. He invented the night raga ‘Darbari Kanhra’, morning raga ‘Mian ki Todi’, mid-day raga ‘Mian ki Sarang’, seasonal raga ‘Mian ki Malhar’, ‘Bhairav’, ‘Sarang’ and ‘Rageshwari’. The life of Tansen is associated with many legends. It is said that a great singer could perform many miracles. Tansen was asked by Emperor Jalal ud-din Akbar to enlighten the lamps. As he sang raga ‘Deepak’ the lamps lit and flames engulfed. Other miracles of Tansen include his ability to bring rain by singing raga ‘Megh Malhar’. After he sang this raga, it used to rain. Raga ‘Megh Malhar’ used to cool things down and raga ‘Deepak’ would enhance the temperature of the surroundings. Tansen was also famous for communicating with animals through his music. Tansen is also credited with founding the Gwalior gharana or musical dynasty that even today continues the tradition of creating great music.

The crown jewel of musical calendar in Madhya Pradesh, and undoubtedly its most famous musical event, is the Tansen Sangeet Samaroh. The festival has grown under the patronage of the government into an International Music celebration. The Tansen Music Festival is held in Gwalior in the months of December near the tomb of Tansen at Behat. The tomb was built in the excellently early Mughal architectural style and is presently a part of Gwalior’s cultural heritage. Celebrated classical singers from the country come together and perform five night-long sessions. The best artists come and present these art forms with pride in front of a huge audience and pay homage to the great maestro with their performances. One of the most prestigious prizes in Indian Classical music – the Rashtriya Tansen Samman is awarded to a musician at the fest. Music lovers from all over the world gather to pay tribute to the man who is considered the most illustrious musician of medieval India. The event is organized by the Academy of the Department of Culture and the Government of Madhya Pradesh.

The festival is made more interesting and informative so that awareness can be spread about India’s Cultural Heritage. The lectures and discussions in the segment called ‘Vadi Samvadi’ help in doing that. Apart from this, it is just a great platform to encourage next-generation musicians and showcase their talent in the presence of thousands of music lovers.