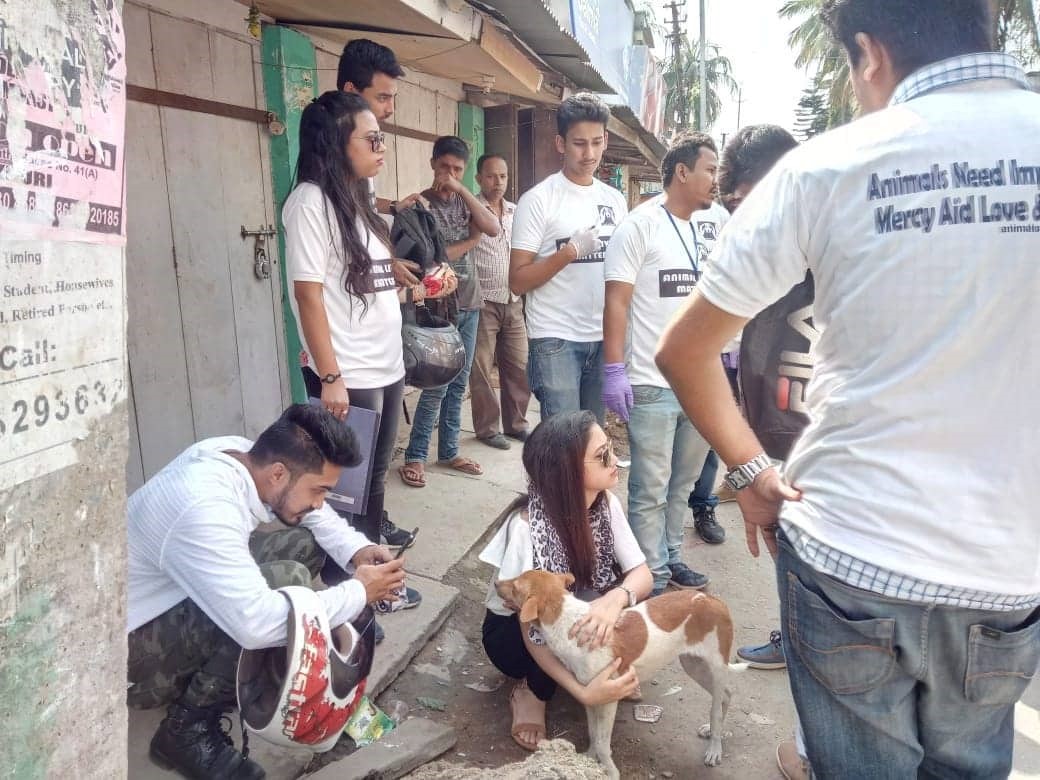 As society turns cruel towards animals and nature as evident from the natural calamities every year, taking an initiative is far from now or never. Whatever is left, should be cared for and treated with love and affection.

The “Animal Need Importance Mercy Aid Love & Shelter” (ANIMALS) is an organization which looks after the ill, abandoned and injured street animals under the ambition of “on site treatment” campaign of animals. Started in July 2017, the organization is in the able hands of members namely Gunojit Mazumber, Prof. Acheenta Gohain Barua, Joydeep Das, Dr. Rajajlakhsmi Srinivasan, Dr. Jyoti Pawan Chutia, Sanjay Sutradhat, Owaker Yunus, and Aquib Mustafa. Apart from this ANIMALS have general members across Assam mostly from Guwahati. Now a days the most important and biggest concern after global warming is about the endangering species.

Gunojit Mazumber, one of the executive members of the organization, was once travelling via train to his hometown. He saw a crudely injured street dog at the railway station. A week later when he came back he saw the dog again in the same condition. It pounded so much that he went with some his friends to rescue the dog. He and his friends brought the dog to an NGO and the dog as saved. Since that day he developed affection for street animals with an aim to help them.

Gunojit started with helping the needy animals and gradually realized that he should start an organization for the welfare of these animals. And that is how he and his friends came up with the idea of giving birth to this organization.

The sole aims is to provide treatment to ill and abandoned animals, voice against animal abuse, conduct awareness campaigns against illegal poaching of wildlife, provide accident prevention collars and unique identity to each and every street dogs under the glow in the dark campaign of ANIMALS. Moreover, the organization also vaccinate anti rabies to control rabies under their rabies free Guwahati campaign.

ANIMALS is working towards providing a place for these strayed creatures to live in a peaceful and safe environment where they can grow up safe and sound.
The organization’s members believe, “As our society progresses, time has arrived to give love respect and care to all animals. A civilized society cannot accept abuses and cruelties whether occurs with a human or animals. In the same way time has come to pay more attention and conservation nature of whatever little is left.
Today, our society is in madcap circumstance where an organization like ANIMALS is much needed. ‘ANIMALS’ is a perfect instance to say that humanity does exist in this world. A high five to ‘ANIMALS’ for becoming such a great role model in our society.