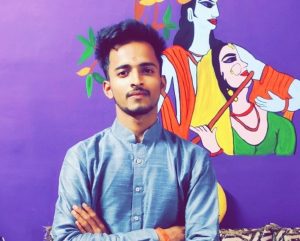 Sammy’s allegation came after his vehement support to the ‘Black Lives Matter’ campaign around the globe after the killing of African-American George Floyd by a white policeman in the US.

Darren Sammy, who is former World Cup Winning West Indies Captain is alleged of being subjected to racist comments during the time in the  Indian Premier League {I.P.L.} with Sunrises Hyderabad.

“I just learnt what that ‘Kalu’ meant when I played for Sunrisers in the IPL. They used to call me and Thisara Parera as Kalu. I thought it meant stallion initially but my previous post tells me something different and it makes me Angry” wrote Sammy on his Instagram post on Saturday with a series of stories on Instagram. 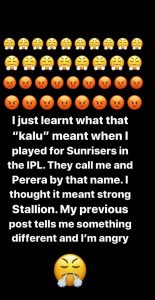 In a tweet, he said “ICC and all the other boards are you guys not seeing what’s happening to ppl like me? Are you not gonna speak against the social injustice against my kind. This is not only about America. This happens every day. 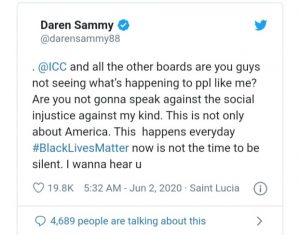 Sammy who led West Indies to two T20 world cup titles, and this statement coming up from him can really harm the reputation of gentlemen’s game.