Letter to the ‘Eldest’, Meeting Over Tea, How Amarinder, Sidhu Buried Hatchet After Long-Drawn Cold War

Following quite a while of political quarrel and infighting in Punjab Congress, Chief Minister Amarinder Singh and Navjot Singh Sidhu buried the hatchet as the Captain went to the latter’s swearing-in function as PPCC boss on Friday. The two chiefs chose to accommodate over some tea after a since quite a while ago drawn virus war and a volley of charges, all out in the open.

The 57-year-old Amritsar MLA in a letter on Thursday mentioned the CM to come for the establishment function, considering him the “oldest of the Punjab Congress family” and saying he had “no close to home plan”. Relaxing his position, the main pastor welcomed party MLAs for tea at Punjab Bhawan in front of the establishment service at the gathering central command. This is the first run through in almost four months that Sidhu and Amarinder Singh met one another. 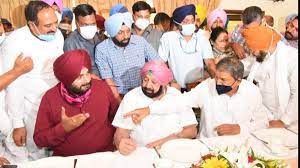 As the two chiefs chose to let bygones be bygones, CM Amarinder Singh asked party laborers to stretch out full help to the new state president. “We host to reinforce the Congress get-together in Punjab. I’m telling everybody from this stage that we need to help Sidhu and turn out together for Punjab.”

Before assuming responsibility for the state Congress, Sidhu met the central priest at Punjab Bhawan. In a viral video of Sidhu welcoming the central clergyman, he was heard saying, “How are you, sir?” The main priest and the Amritsar (East) MLA were seen sitting close to one another at Punjab Bhawan and later at the gathering base camp.

As indicated by Congress MLA Pargat Singh, the gathering among Sidhu and the CM at Punjab Bhawan was “heartfelt”. He said Sidhu met the main pastor over tea within the sight of Congress general secretary Harish Rawat.

The main pastor’s media counsel tweeted photos of the two chiefs having a discussion. The CM had welcomed Congress pioneers for tea at Punjab Bhawan before the establishment service. Sidhu came from Patiala and went to Punjab Bhawan quickly before the CM’s appearance.

Sidhu and Singh have been in constant conflict for the past some time, particularly since the previous cricketer-turned-lawmaker’s assault on the CM over profaning cases in the state. Sidhu has been disparaging of Amarinder Singh after the Punjab and Haryana High Court in April suppressed a test into the 2015 Kotkapura terminating case. Sidhu had scrutinized the claimed “purposeful deferral” in guaranteeing equity and had blamed Singh for sidestepping duty in the 2015 blasphemy case.