What went well with Indian Railways, it is no longer what it used to be

S  Vishnu Sharmaa, INN/Chennai, @infodeaofficial
Things always do not remain the same with many of us as time moves ahead. The old taboos that prevented growth may give way to new practices that bestow growth. This has happened with Indian Railways. The old notion that Indian trains don’t reach their destinations in time, the compartments are far from being neat and tidy has been done away. 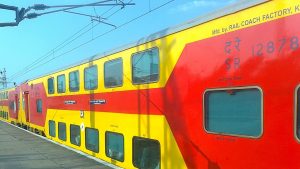 Complaints of passengers on social media platforms of the prestigious establishment are earning faster redress. Assurance was obtained from Railway Minister itself in certain cases. While one can never deny that a lot has to be done, improvement in many aspects is worth celebrating. Infodea went ahead to find out the measures that changed the image of the mammoth organisation.
Providing Wi-Fi
Accessing internet in the railway stations across the nation while waiting for trains has caught up well with the passengers. This has become possible due to the provision of wifi at railway stations. With a simple beginning in 2016 with a tie-up between Indian Railways and Google, currently about 832 stations across the country have free wifi facility through which passengers can access internet free for 30 minutes. Another 775 more stations are likely to have wifi facility in the next phase.
Advanced train system
Indian Railways has moved towards high speed trains. Introduction of Train 18 that can run at a speed of 160 kmph is a step towards that direction. The train has all modern features and can usher in a new chapter in the history of train travel in India. Currently, the Train 18, also known as Vande Bharat Express is meant for connecting New Delhi with Benaras. Soon more routes in the country will have these high-end trains.
Introduction of LHB coaches
The government transporter has now bidding good-bye to conventional train coaches and begun using Linke Hofmann Busch (LHB) coaches. These are known to have greater safety features and passenger carrying capacity. The interiors are also better in these coaches. Currently, about 6,000 LHB coaches are said to be in use in Indian Railways, according to sources, all fleet in Indian Railways will be an LHB one in about another four to five years.
Grievance redressal
Grievances redressal has undergone a steep change in the recent years. In the past where travellers had to hurry from pillar to post to just register their complaint, now they can do it with help of a mobile phone without a need to move even an inch. Passengers can call designated number either from a landline or mobile phone for grievance registering. Social media platforms like Facebook, Twitter can also be used to register complaints. In many cases, responses have come from Railway Minister himself upon registration of complaints on social media, faster redress was also seen.
Railway security
Security system in the railways handled by Railway Protection Force (RPF) has also turned modern. Passengers can call RPF over mobile phone to register complaints regarding their lost luggage or valuable items in the trains. Should someone feel that their near and dear passenger travelling on a train needs help, they can dial RPF for required help. The popular force can be reached over a toll-free number 182. It is has adopted technology to render better service, the force has presence on facebook, twitter, the popular social media platforms.
In-house tidiness
Passengers now need not keepup with the dirt inside the compartments throughout their journey as in the past. On-board Housekeeping Service has been introduced. A group of personnel are posted inside the travelling trains who would visit the compartments at regular intervals and clean them. About 560 trains in India are said to have the OBHS system, more are likely to get in near future.
Technology for berth status
We need not worry over our coach and berth number if our ticket turns into a confirmed one from RAC. Earlier, passengers used to reach the station quite early and roam on the premises for information. Now, travellers get their coach and berth number on their mobile phone through an SMS. Delay in train arrivals are also informed to the passengers through SMS alerts.
Enhancement in numbers
Another point that has turned things into the favor for the government transporter is the increase in berths for RAC to give space for more passengers. Also, allotment of lower berths for senior citizens, pregnant women and women passengers above 45 years has been taken up to six berths in sleeper coaches, up-to four berths in duronto, rajdhani and full AC trains.
No wait-list worries
Passengers need not worry if their the status on their booked tickets is still under a wait-list. Vikalp scheme introduced by Indian Railways will given them an option to chose another alternative train while booking ticket on some other train.
Clean blankets
Railways has acted quickly and took efforts to ensure clean blankets are supplied to passengers travelling in AC compartments. Railways is said to have decided to provide nylon blankets to passengers. That is not all, now railways has taken efforts to ensure the blankets are washed twice a month. The used blankets will also be sanitized regularly.
Share