S Vishnu Sharmaa, INN/Chennai, @svs037
Loco Works, Perambur turned centre of attraction recently when the top officials of Southern Railway were there for annual inspection of it. Leading the team was Southern Railway General Manager R K Kulshrestha.
The team reviewed the developmental works being taken up at the reputed establishment. The chief workshop manager of Loco Works explained all the improvements and  achievements done by the Loco Works team including many innnovations done by the staff of Loco Works. 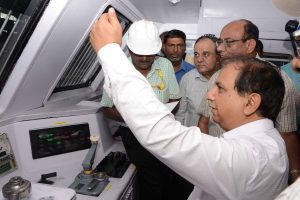 During the visit to the Electrical Loco POH shop, the improvements made in the recabling section, contactor section and  the Loco in which crew friendly features were provided for the comfort of the loco pilot and assistant loco pilot were seen.
Crew friendly features include air conditioning, increased moving space, improvement in drivers seat with comfort of drivers. A new Cable cutting machine which cuts the power cables to required length so as to avoid strain to the employees was commissioned during the visit.
The work done along with the vinyl wrapping done for the interiors of the 351st Diesel Power Car which is being overhauled at Loco Works was appreciated by the General Manager.
The General Manager suggested that the same can be adopted in the Electrical Multiple units also as a trial measure. From safety point of view, GM advised that the workshop should study and explore the possibilities of providing larger lookout glass in diesel power cars for better visibility to drivers during running. 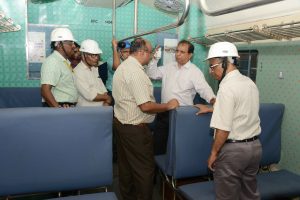 Better sun visors should also be provided for the ease of drivers to avoid glare during train operation, he said. Grit blasting Shed was also commissioned during the visit. Grit blasting is the process where the bogie and undergear components are thoroughly cleaned by grit blasting which removes oil and muck from the components as a measure to prevent corrosion.
An Utkrisht Coach which incorporates better comfort, amenities and aesthetic look to the passengers was also inspected by GM/S.Rly, who advised that the mobile charger points should  be provided at a higher level than the existing one, so that the passengers in the top berths could also use the facility.
The General Manager appreciated the efforts of the workshop in getting the NABL (National Accreditation Board for Testing and Calibration Laboratories) certification for the Chemical and Metalurgical Laboratory which tests the samples of Bio Tank residues.
The General Manager advised that  the greenery should be improved in and around the shops by planting more trees, creating  gardens in front of each shop so that the environment can be further improved. 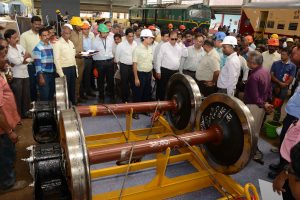 He appreciated the work done at the workshop and gave awards in appreciation of good work done. Perambur Loco Works, one of the oldest Workshops of Southern Railways has progressed from carrying out repairs to steam locomotives in its formative years to upgrade itself with the latest technological advancement and become a modern workshop today, with its focus on repairs to coaches, diesel power cars, electrical locomotives, self propelled accident relief train and tower wagons.
Share