Children lead the way to live with equal rights 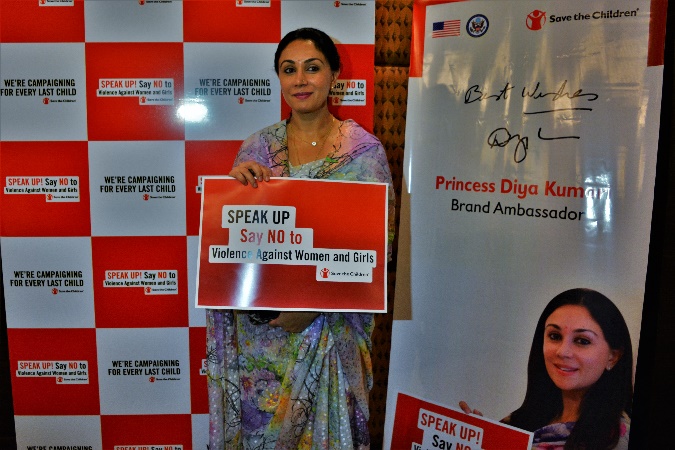 At the age of 9 Rumi was sent to Patna and forced into child labor. She worked as a domestic help for 2 years and found herself in a situation where options were limited. At the age of 13, she started attending middle school but her family’s dire need for money resulted in Rumi’s early marriage. Being the sixth child among eight siblings, Rumi knew that child marriage would surely end her dream of finishing education. She saw her sister as a child bride and knew that there were moments when she did not wish to live at all. In these quiet moments with her elder sister, who is now 20 years old and a mother of two children, Rumi decided to put a stop to her wedding plans.

In the KGBV where Rumi when to study every day, she found her support in a Save the Children field officer. With repeated requests, follow-ups and enormous efforts, Rumi managed to stop her early marriage. Today, Rumi is an Ashoka Youth Volunteer and is attending National Level Workshops for her fight against Child Labor in Jharkhand. From Burmu to the national events she has come a long way and hopes to make a name for herself, making her community proud. Rumi is one of the Champions4Change and is on her journey to make her hopes and dreams a reality as a welfare body stands with her in every step. 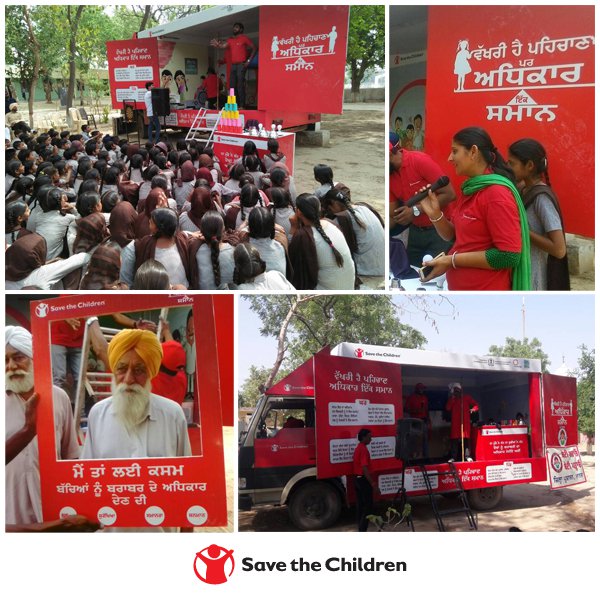 Rumi and many others like her are supported by Save the Children, the organization taking forward United Nation’s crusade against gender based violence by conducting a series of activities in December 2017. Girls and women in India face never-ending gender discrimination, neglect and exclusion throughout their lives due to the prevalence of patriarchal structure and gender inequality. In ‘Stolen Childhoods’, a report published by Save the Children states that according to Census 2011, 78.5 lakh girls (2.3% of all women or girls who were ever married or were married in 2011) were wedded even before completing 10 years of age. Census 2011 also found that about 30% of all married women, or 10.3 crore girls, were married before they had turned 18. The report also claims that 50% of all adolescent births occur in just seven countries, that includes India.

Various studies have proved that prevalence of spousal violence tends to be higher in the poorest households and decreases with increasing education levels of women and men. In our deep-rooted patriarchal societies, girls often suffer due to these unjust power structures. There is therefore a real need among children and young people for an opportunity to discuss important issues to demystify gender discrimination and its root causes, strengthen their self-esteem, make them aware on their rights and become active agents of change.

Keeping in mind the urgent need to respond to the call of these children, Save the Children developed various interactive methods to form Allies4Changeand thanks to such initiatives, Rumi and other girls can lead the way to bring about a change and end gender discrimination forever.

With this objective, a campaign against Gender Based Violence called ‘SPEAK UP- Say NO to Violence Against Women and Girls’ was conducted in October last year. Supported by the US Department of State in north Indian states of Punjab, Haryana, Rajasthan and Uttar Pradesh,the project aimed at bringing together community and other stakeholders to play an active role in combating gender based violence. In Rajasthan, Save the Children has collaborated with Lok Samvad Sansthan and Rajasthan University’s Centre for Mass Communication. The initiative is supported by member of the erstwhile ruling family of Jaipur, Princess Diya Kumari Singh who is also the brand ambassador of Save the Children’s Campaign against gender based violence in Rajasthan. 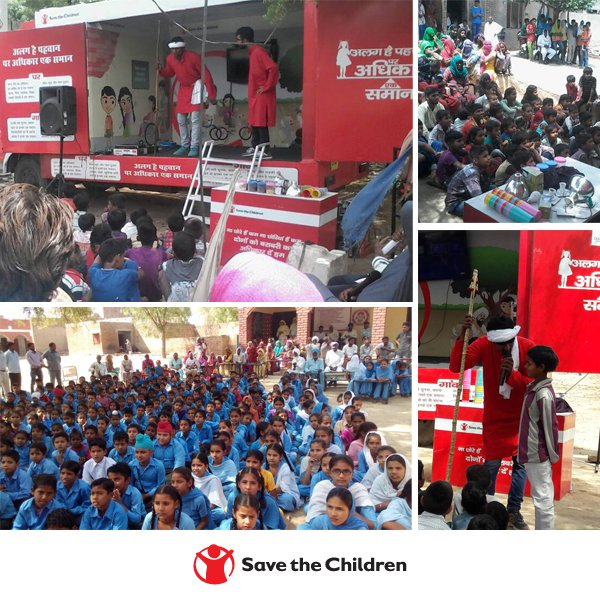 One of the major tools of the campaign used to sensitize the masses is the Video Van Caravan.The mobile van is a medium to engage and sensitize the rural community through education and entertainment. The Video Van traveled around villages to stage NukkadNatak, play videos/films and use participatory modes like IEC materials. The method was extremely well received in Haryana and Punjab in sensitizing the community on core child rights principles without discrimination on any grounds. The video van was successfully launched in other states like UP and Rajasthan to strengthen local communities and bring about a lasting change in the mindset of people on bridging the gender gap and spread the message of ‘No to Gender-based discrimination’. The vans covered over 1000 villages in the four states to spread the message ‘Identity is different, Rights are one’ with the sole objective to ensure that boys and girls are treated equal and given equal opportunities. For the past two years, these mobile caravans have reached and benefitted over 300,000 community members and to protect children from abuse, neglect, violence and exploitation.

Another tool is the Lalitha – Babu module which is based on the founding principles of UN Convention on the Rights of the Child (CRC) and intends to make children aware of gender discrimination by adopting a perspective based on equality, justice and rights. The aim of the method is to set up discussion groups for girls and boys in the age bracket of 10 to 19 years. The discussion groups are led by young people, usually around 15 to 25 years old, who are called as ‘Discussion Leaders’. The discussion leaders engage with the girls and boys, listen to them and inspire them to stand up for their opinions and increase the amount of influence they have over their own lives.

Over the last two years, Save the Children has been the building capacity of Child Protection Committees and Children’s Groups in these villages to tackle the issues of gender-based violence and discrimination. During this period, we have groomed several Child Champions – boys and girls who not only demand their rights but stand up for the rights of children around them – who have worked on resolving children’s issues and are also actively participating in this campaign.

The people of the Sarangada Tribe, blindly believe in Child Marriage. Through the ages, the Tribe has been influenced by modern education and hence, these traditions with are against the basic rights of children are now being questioned. Geetanjali is a 16 year old adolescent from this tribe in Odisha. Her family belongs to the Schedule Caste and is purely agrarian and has been acutely poor for the last 4 generations.

Due to all these adversities, her parents were getting her married without her consent. Initially she faced mental and physical torture whenever she raised her voice against their plans to marry her. Eventually, with the help of Save the Children Field Officers she managed to communicate her concerns and her parents started to listen to her.

When several visits by the Field Officers was not yielding desired results, she had directly interacted with the groom’s family, and the grrom himself. She explained her point of view and one simple question, “Can you please ask us… when we want to get married?” Eventually, she involved the Panchayat Pradhan and finally managed to stop her child marriage.

Today she is an inspiration for many girls in her community who want to continue their education. She is studying in 12th standard today and hopes to pursue higher education. She is counselling her peers about the ill-effects of child marriage, and how to raise a rock-solid voice against this social menace. Through her work she is stopped 5 child marriages in her village and wants to continue her work in years to come. We look upto our #Champions4Change for true passion and resilience for the cause, it is their stories that push us to continue to support them in every way possible.

In the city of Mumbai where the pace of development is increasing every day, Saleha lives in the unavoidable corner, next to the biggest dumping ground. The life-expectancy in that area is almost half of India’s average life expectancy. The priority for Saleha or her family is not to live a long life but to live one with the access to basic human rights. The lack of safe drinking water, unsanitary environment along with the toxic gases that the mountain high dumping ground emits daily makes Shivaji Nagar Slum India’s worst nightmare.

Saleha and her family moved from a small village in Uttar Pradesh to Shivaji Nagar 15 years ago in search of job opportunities. Her father soon found himself working in a garage shop but only to make ends meet. Meanwhile, Saleha would attend the government school nearby, not knowing that her dreams to finish her education would be a struggle in years ahead. As soon as she finished 8th standard, Saleha was forced to drop-out. It took 2 years, a complete change of mindset of her family and support from the local NGO and Save the Children for her to be where she is now. Saleha has led by example, managed to pave the way for other girls in her community to pursue higher education. We know that our #Champions4Change can and will take the baton forward and we look forward to Saleha’s bright future.