Freight loading…achievements on the raise 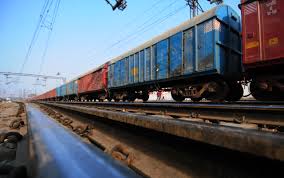 Coal loading had constituted 55 percent of the total loading during the current year.  Out of the total coal loading of 11.51 MT during April-October, 2018, 67 percent of the consignment has been loaded to power houses such as TANGEDCO, IL & FS Tamil Nadu Power Company Ltd., Udupi Power Corporation Ltd., and TAQA Neyveli (Neyveli Lignite Corporation India Ltd.,), 0.63 MT of petroleum coke produced by Bharat Petroleum Corporation Limited (BPCL) at Irumpanam was also loaded during the period.
The originating loading of dolomite and limestone has recorded a sharp growth of 61 percent which stood at 1.48 MT during April-October, 2018 compared to 0.92 MT during the corresponding period of the last year, 0.22 MT of Gypsum has been loaded during 2018-19 upto October, 2018 as compared to 0.15 MT during the last year registering a growth of 47 percent which includes loading of 7 rakes (28,000 tonnes) from the new siding at Kamarajar Port, Ennore.
As for iron and steel, 46 rakes of 1,18,000 tonnes of finished steel was loaded by Jindal from their Salem Plant of which 71,000 tonnes of steel was moved to Chennai Port for export and the rest was moved to Northern part of India. 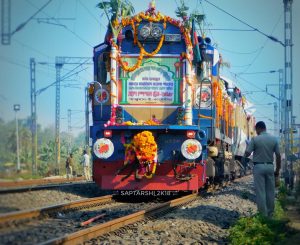 Iron Ore loaded by Jindal Steel Works, Salem Plant stood at 0.38 MT during the year compared to 0.23 MT loading during last year registering a growth of 65%. Tamil Nadu Civil Supplies had loaded 317 rakes of eight lakh tonnes paddy from Cauvery delta to various districts of Tamil Nadu during April-October, this year as compared to 64 rakes of 1.6 lakh tonnes loaded during 2017-18.
Container traffic gained momentum as Dalmia Cements undertook a loading of 16 container rakes of cement to Tuticorin Port and three container rakes loaded from the New siding at Kamarajar Port and three container rakes loaded by CONCOR from their new siding at New Mangalore Port.
Southern Railway registered an originating freight earnings of Rs.1774 crore during April- October this year recording a growth of 44 percent over the earnings of the corresponding period of 2017-18.