No to violence on women, children

S Vishnu Sharma,  INN/Chennai, @infodeaofficial
Tower Park at Anna Nagar in Chennai became an important spot the other day as message of high relevance was delivered there. ‘Say no to violence against women and children,’ was the idea conveyed on the occasion. Scouts and Guides from ICF district took up the task of spreading awareness on the important issue.
We have regular meetings where we decide topic on which there is a need to spread awareness among the public, said Jayaraman, group leader in the Scouts and Guides group of ICF disctrict. Topics of contemporary relevance are chosen on which we take efforts to spread awareness among the public. 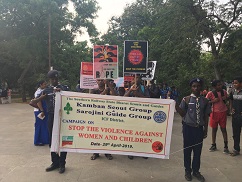 Earlier, we spread awareness on Aids, environment conservation. Soon we plan to highlight the problems caused by tobacco usage, said another group leader Kamala Kannan. Scouts and Guides held placards carrying messages and went round the park even as the members of general public went ahead to read what was written on them.
‘Don’t show your muscle power on women,’ ‘I am real man which means I show respect to women’ and ‘No child abuse or face jail’ were among the messages on the placards. Drama revolving around popular cartoon characters Dora and her friends was enacted much to the delight of visitors at the green spot.
Drama revolved around Dora and her friend Bujji reaching their friend Benny’s house to take part in his birthday party. Dora and her friend find the way to their friend’s house through a park and a playground saying out loud and clear that children should not accept edibles from strangers and should not allow people to touch them anywhere on their body. 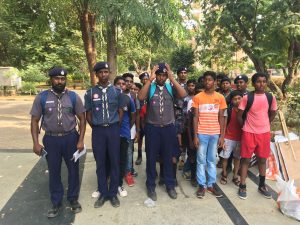 Second drama was on problems faced by women at their workplace, while travelling on public transport and using internet and social media apps in particular. Santhi, chief character in the play highlighted the travails of women. A character based on the hero of popular movie Bahubali turned on the stage to highlight the need to punish those who cause problems to women.
Usually we do take up awareness on railway premises, but this is the first time we have come to a place out of railway premises, said Jayaraman, founder of Kamban Scout Group, a part of ICF district of Bharat Scouts and Guides. Nevertheless, it was a wonderful experience doing it. The attention we got from the members of general public was tremendous, he said. Idea is to take up such programmes in future with the same vigour, he reminded. 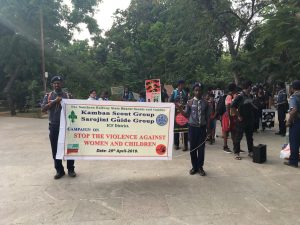