S Vishnu Sharmaa, INN/Chennai, @svs037
The days are not far away when the journey between the four corners of the country could be accomplished in less time than what it takes now. Thanks to the Golden Quadrilateral Project of Indian Railways, travel time between New Delhi, Bombay, Chennai and Kolkata will just be less than what it currently takes.
Sources from the Railways point out that works are being taken up at a quicker pace. The project is quite similar to the popular Golden Quadrilateral Project which connects the four corners of the country through roads. 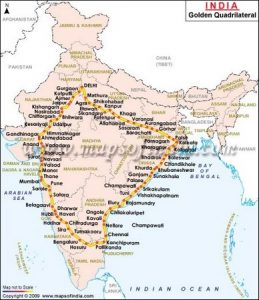 Southern Railway General Manager R K Kulshrestha says the work for upgrading the tracks in the routes of New Delhi to Chennai and Chennai to Howrah will be taken up by Southern Railway. 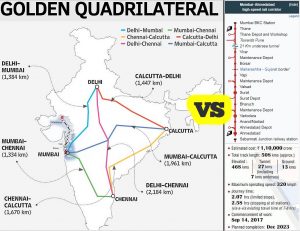 The work of connectivity from Mumbai to Chennai will be taken up by Central Railway. The cost of establishing the corridor connecting New Delhi with Chennai is expected to cost Rs 34 thousand crore, while the cost for Chennai to Howrah corridor is expected to be around Rs 25 thousand  crore. The Mumbai to Chennai corridor is said to cost Rs 26 thousand crore.
What is the benefit? The 2200 kilometre Journey between New Delhi to Chennai will be completed in 14 to 15 hours from its present 28 hours.
Travelling the distance of 1700 kilometres between Chennai to Kolkata will take a time of 13 to 14 hours from its present 26 to 27 hours.
We have sent the cost estimate and other information to the Railway Board, we are likely to start the work once the approvals are obtained.
Share