On wheels, no charging problem

If you are a marketing person or working professional who spends most of the time in travelling and on phone calls and suffering from battery discharge problem than here is something very useful for you guys. A SRM University graduated engineer had come up the a new type of technique which helps you charge your mobile when you are on ride. 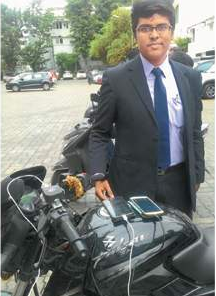 “Power Aid” is a unique product to charge your phones when you are on wheels. This patented product was invented by Amam Arun, a fresh Mechanical Engineering Graduate from Chennai who responded to great need of all his friends and batch mates, who frequently would say that their mobile battery had drained out. His inspiration came from his classmate, a girl who said her parents were extremely worried when she came late from college one day and were not able to reach her as her phone battery had drained out. This device changes potential energy to electric energy and charges your phone and electronic gadgets. No need to start the bike just put the key in your bike and turn it on rest power aid will take care.

This set Amam’s  mind on the road to solve this simple but important issue and he successfully produced his 1st prototype back in December 16. Now 8 months later, he has worked out all the issues and today, he formally launched the product in the name and style of “Power Aid”. The startup is registered with NASSCOM and a patents has been filed for the technology.

J. Govindaraj of Plutus Investment Advisory services, a boutique investment company for start ups, found the product interesting. He says 10-12 crores of two wheelers already running on the roads. Besides this, 6 lakhs autos are sold every year.

Speaking with Infodea Amam says he has a family background of service class people. he always wanted to start up his own venture. Now his dream is coming to be true. A response to great need of his friends is going to be his new venture. He has many plans to come up with same technique which could be really helpful for mankind for their day today use. His father Captain Arun Kumar Gupta, GM, Kamrajar Port Trust. He is eldest in the family and being eldest he is being now inspiration for his younger brother.