A Young Lad Turns Clay into Gold in Karate

Another Chennai based lad, V. Tharun bagged two gold medals which he garnered by participating the State Level Karate Championship that was held in Cuddalore. The event was organized by the Indian Karate Federation. He was then selected for the Indo-Malaysia International Karate Championship 2019 that was held in Tuticorin and won a gold medal in Cadet Kumite and a silver medal in Kata that was organized by the Government of India and KAI (Karate Association of India). And later, he was selected for the International Karate Championship where 9 countries competed namely- India, Saudi Arabia, Sri Lanka, Nepal, England, Malaysia, Bhutan, Bangladesh and Nigeria. The event took part in Visakhapatnam and he won a gold medal in Kumite and a bronze medal in Kata. 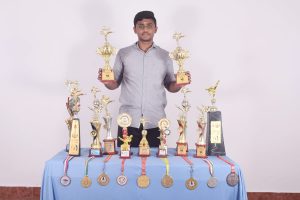 V. Tharun hails from a humble pot-maker’s family but with big dreams. His father Velan, is a small time vendor and his mother Lavanya is a house wife. Both parents were behind Tharun’s success by pouring their entire motivation and support for him. Tharun was born on the 11th of October, 2004 in Attur near Salem. He wants to participate in the Olympics and Asian Games someday and make India proud. One of his ambition is to become a Major in the Indian Army and serve the country unselfishly.

Tharun started his journey in karate in 2014 at the All India Kenshukai Isshinryu Karate Club. He was trained by Kyoshi Rajkumar, the Chief Examiner and Technical Director of Kenshukai Isshinryu Karate. His skillful mastery of the martial arts earned him the opportunity to participate in the first State Karate Championship which was organized by Learn to Win-Martial Art School. He won a silver medal in Kumite (fighting) and this was his maiden achievement.

The same year, he also participated in the State Level championship organized by the Zen Isshinryu Karate Association and won a silver medal in Kumite(fighting) and bronze medal in Kata. His next milestone was participating in the National Level Karate Championship in 2017 which was organized by TKFI (The Karate Federation of India) and the Government of India, where he bagged a silver medal. Following this, he put in a lot of sweat and determination and participated in five State Karate Tournaments organized by the Government of India and won 3 gold medals in Kumite(fighting) and 2 gold medals in Kata. This was followed by the coveted black belt from his trainer Kyoshi Rajkumar in 2018. He also received the Best Performance Award for Kumite in the black belt camp.

It was in the year 2018 that took him a notch further and won a gold at the District Karate Championship for Kumite and a silver for Kata. Tharun moved on to the State Level Karate Championship and won 2 gold medals. In the same year, he participated in 2 National Level Karate Tournaments and won 3 gold medals and 1 silver medal. In December 2018, he was selected for the Indo-Sri Lankan Open Karate Championship -2018 which was held in Kerala and won a silver medal in the Cadet Kumite. It was affiliated by: The Japan Karate Association of India, Recognised by the Government of India (Ministry of Youth Affairs and Sports), WKF (World Karate Federation). 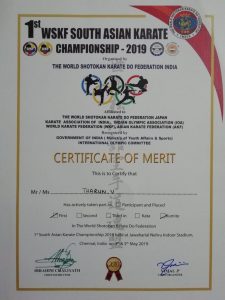 And 2019, was the biggest karate tournament he had participated in that was approved by the Karate Association of India (KAI) and was recognized by Indian Olympic Association and Ministry of Youth Affairs and Sports, Government of India, International Olympic Committee (IOC). He won Gold Medal in Kumite in the 1st WSKF South Asian karate championship, held at Jawaharlal Nehru stadium in Chennai last 4th and 5th May, 2019, organized by the World Shotokan Karate Do Federation of India, affiliated to The World Shotokan Karate Do Federation, Japan, Karate Association of India, Indian Olympic Association, World Karate Federation, Asian karate Federation, recognized by the Government of India( Ministry of Youth Affairs and Sports), International Olympic Committee.

Tharun said in an interview, “I’m very much passionate about Karate and Boxing. I have keen interest in sports since my childhood. I have done some more achievements and received many prizes in Carrom, Kho – Kho, Obstacle Race, Football and Shot put besides very good in education too with good marks. All of my achievements are only because of the support given by my parents, relatives, teachers and my friends . All of them play an important role in my life. They have encouraged me a lot to succeed in karate. This was also because of my teacher’s support and their positive advise. I thank all the teacher who supported me and motivated me a lot.” He recognizes his master’s effort, Kyoshi Rajkumar, for his great inspiration. It was solely because of his training that made me win so many medals and trophies. He takes special care of me, Tharun added.

Tharun’s future plan is to participate in the up coming world tournaments with a high hope to be selected in Olympics and in Asian games. He is now a member of the World Karate Federation and Sport Accord and International World Games Association.