Harbhajan Singh Plaha or simply Harbhajan or Bhajji pa is an Indian International Cricketer who plays all forms of cricket but is a spin ball specialist. He is the second-highest number of Test wickets by an Off-spinner.

Harbhajan Singh was a former captain of the IPL team Mumbai Indians. But in IPL 2018 Chennai super kings (CSK) bagged him at some good price.

Bhajju Pa made his Test and ODI debut in early 1998. He is mainly attacking mind bowlers who can easily vary his length and pace. Although he is often criticized for this.

Not only compiling himself within bowling he has helped the country and Mumbai Indians with the bat numerous times.

On the opening day of IPL 2019, Harbhajan Playing from CSK against RCB took 3/20 from his four overs and won the Man of the Match title.

He made it a win for CSK. He removed Virat Kohli at just a small score of 6. Harbhajan gauged the length of his goolies and often changed the pace of his bowling to trouble the batsman.

In the 23rd match of IPL 2019, CSK defeated KKR and made a place for the team on top of the scoreboard.

After Deepak Chahar’s wicket Harbhajan in the second over dismissed Sunil Narine opening doors of victory for CSK. Overall taking 2 wickets in a match he turned the match for CSK as well as KKR of course in different ways for both. 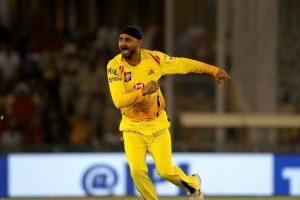 Harbhajan Singh proved himself a lucky charm for CSK in the 2019 IPL season.

Harbhajan’s 2 wickets out of 31 compelled Delhi to restrict themselves at just 147, while making a title for himself as the fourth bowler in the history of IPL to take 150 wickets. He is currently the third-highest in the tournaments.

Not restricting himself to the ball he made this 2010 performance memorable. He cracked 49 runs in just 18 balls for MI with his eight fours and two sixes he single-handedly from 119 to 172.

The great off-spinner after this took 3 wickets of Deccan’s and they were all out at just 131 against a chase of 173.

The match was started with a rocking performance by Kings XI Punjab batting first but was completely opposite for Mumbai Indians as Rohit Sharma was dismissed at the 2nd ball of the innings.

By the end, MI needed 118 runs in 6 overs which was approx an average of 20 runs per over. Coming of Harbhajan in the field in the 15th over and smashing the ball with his bat he showed an amazing performance.

Though Kings won the match by 18 runs that were a memorable performance by Bhajju Pa which was praised by the whole stadium and the opponents as well.