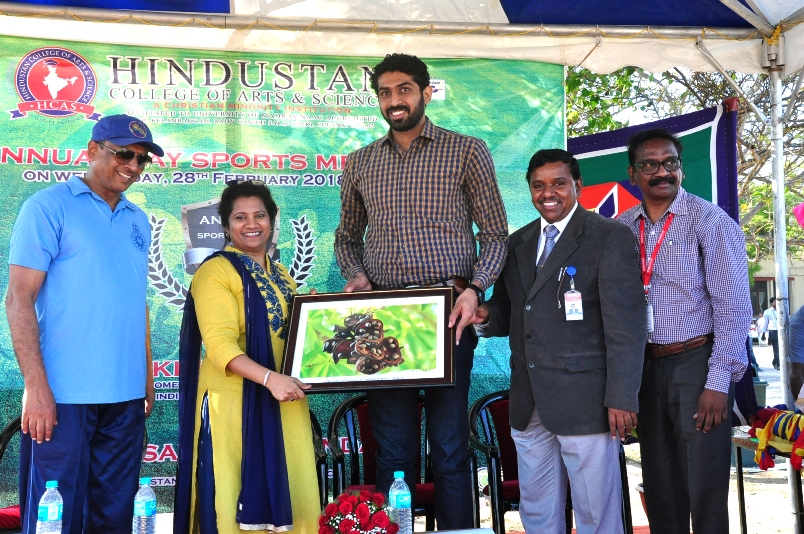 By; INN, New Delhi, @infodeaofficial
Recently, HCAS organized their Sports day in the college ground of Padur campus. The event got its majestic opening by March past of students. It was followed by the college choir singing to mark the occasion as whole college was divided in to four houses namely Phoenix, Pegasus, Hercules and Orion. Dr. V.J. Phillip, Deputy Director – Academics, declared the commencement of sports meet and The Director, Dr. Susan Marthandon, lit the torch as it was taken around the ground by different houses. Sports secretary Mr. Bharath read out the Oath and established a platform of sports events functioning with all the rules and regulations of the prestigious institution.

The Vice Principal Mr. Samuel Sampath Kumar while introducing Chief Guest Mr. Pethani said “It is a privilege of all the students as well as the faculty to listen to a man of the stature of Mr. Pethani. Being a national basketball player of 6’6” height, he has toured 13 countries like Iran, Japan, China to name a few. Furthermore, he was felicitated with The Most Valuable Player award in 2014 by the Government of India.

The Chief Guest Mr. Rikim Pethani in his address said it is his immense pleasure to speak to such a great audience of teachers and enthusiastic students. He spoke on value of education as well as of sports. He emphasized that to achieve something, keep trying hard as you will get success in the end. His speech received an enthusiastic ovation as it was encouraging for the young participants who were all set to win accolades or medals.
In her felicitation address, Dr. Susan Marthandon, the Director said it is a very good initiative of having a Sports Day and it was her immense pleasure to speak on such an occasion. She believes that sports invokes discipline, similar to education and congratulated the Deputy Director, who took part in men’s walking competition. She also announced that women staff and students from next year onwards can wear salwar kameez which would encourage them to participate in such endeavors in near future. It is nice to have Mr. Pethani, a leading basket ball player with lot of determination and prestige, to share their wisdom and experiences with the students. It is not only important to excel in studies but in sports as well. She congratulated college lab dance team for winning 10 lakhs rupees in the competition. HCAS has took part in several sports events in college competitions across Chennai and will continue to do so. Her address ended with heartfelt congratulations to the students and staff who contributed in the event and warm success wishes.

Mr. Bharath sports secretary HCAS while proposing a vote exclaimed that it is an honor to have Mr. Rikin Pethani as the Chief guest. Director Dr. Susan Marthandon for continued support thanked Dr. VJ Philip DD (academics) and Principal Dr. S. Thirumagan for stewardship, Deans, HODs teaching and non teaching staff for all arrangements as the function came to an end with a National Anthem sung in unison.