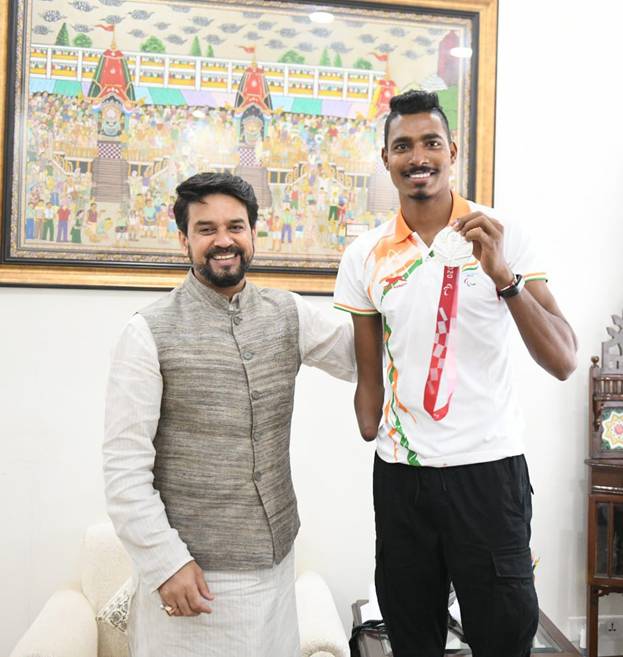 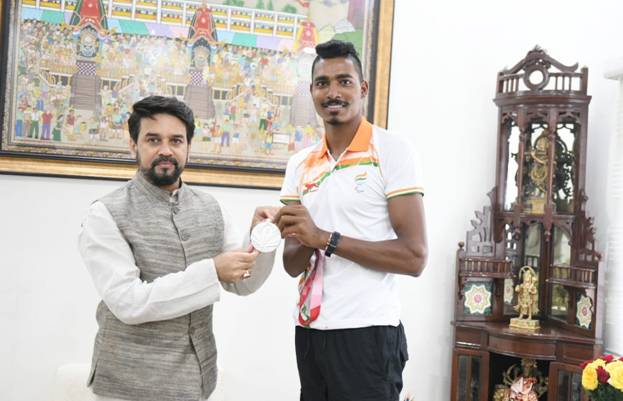 Speaking at the event, Shri. Thakur said, “India is ecstatic at the brilliant performance of our Paralympians. India has won its highest ever medal tally ever! We sent out the biggest contingent this year. The unflinching support of our PM Shri Narendra Modi ji towards sports has indeed motivated our athletes to give their best and I congratulate Nishad on his success. Nishad has shown that with perseverance success can be attained at the highest level. The government will continue to support India’s Paralympians with facilities and funding so that they may continue to excel internationally. I have an additional reason to be thrilled by Nishad’s success as he hails from my own state of Himachal Pradesh.” MoS for YAS Shri Nisith Pramanik said that from the age of 8 years itself, Nishad has fought very difficult circumstances and has today won a medal in the Olympics. His life’s story can inspire all of us and teach us the lesson that despite hurdles, if we want, we can achieve our dreams. I congratulate Nishad on this feat. Our Prime Minister has extended his constant support to our para athletes, calling them up before and during the games and our Honourable Sports Minister has personally monitored the requirements of athletes, both of which have given them the strength and motivation to perform at the World’s highest sporting stage.

Silver medalist Shri Nishad Kumar said that I could not believe that I had won a silver at the Paralympics. I asked four officials before I could actually believe it. I would like to thank our Prime Minister Shri Narendra Modi for ensuring that we have full support of the govt in anything we need – diet, equipment, coaching. I feel honoured that I have been invited by the Sports Minister  and he has met me and felicitated me on the very first day of my return to India. I have never had this experience before and now the feeling of the win is really sinking in. At the Paralympic Games, Nishad equaled the Asian record set by him earlier this year with the 2.06m jump. He has been training at the National camp in SAI Bengaluru under the guidance of coach Satyanarayana. The Government of India duly supported Nishad ahead of the Games in terms of facilitating foreign exposure trips and over four international competitions to the tune of Rs 10.50 Lakh from Target Olympic Podium Scheme (TOPS) and Rs 10.21 Lakh from the Annual Calendar for Training and Competition (ACTC). Nishad has had a roller-coaster of a calendar year. He tested positive for Covid-19 twice but he continued improving and set two Personal Bests in 2021. He jumped 2.07m at the Para Athletics Selection Trials held in Delhi in June, and this helped him secure a spot on the Indian Team for the Tokyo Paralympics. He won a gold medal in the High Jump T47 category at the Fazza Para Athletics Grand Prix in Dubai right before the pandemic in Dubai and repeated the feat at the same competition by winning the elusive gold, also in 2021.

Nishad, who comes from a humble family of farmers, was only eight years old when his right hand was damaged by a grass-cutting machine on his family’s farm. However, he did not let this incident deter his spirit. Two years later, he started practicing in high jump on his school grounds. Nishad competed in the School Nationals, along with able-bodied athletes, in 2017 where he finished 10th with a jump of 1.75m. After completing his schooling in the same year, Nishad moved to Panchkula to train at the Tau Devi Lal Stadium. It was no looking behind for him after that!