Hockey India Executive held an urgent executive board meeting on July 10, to declare Manipur’s Gyanendro Ningombam as the President of Hockey India.

Hockey India Executive held an urgent executive board  meeting  on July 10, to declare Manipur’s Gyanendro Ningombam as the President of Hockey India.

This was followed by the resignation of Mohd Mushtaque Ahmad which he gave on July 7 due to his personal and family problems.

Hockey India Emergent Executive Board meeting,  the hockey executive board accepted and approved Mohd’s resignation and announced Gyanendro Nigombam as the officiating President who was then the India’s Senior Vice President.

In the presence of Mohd. Mushtaque, Indian Hockey has achieved many great achievements and served the National Governing Body under Secretary General

Under his rule Hockey India successfully hosted FIH’s men’s World Cup 2018 and made it to Tokyo Olympics Games for both Men’s and Women’s team in FIH Olympics 2019.

Nigamboham has also served for a number of years with Manipur Hockey, and was the most important element in supporting talented players and development of the sport aiming to take it to sky heights. 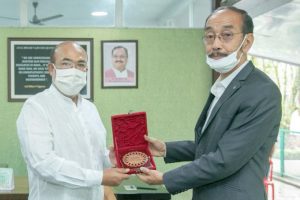 Apart from this he has also worked as the editor in an evening daily newspaper of Manipur named Meeyam.