The man who has always raised his voices in social activism has declared that he won’t be wearing any messages related to social justice on his jersey during the coming NBA, which are resuming from July 30 in Florida.

He has always outspoken about the racial inequality but has now explained and cleared his point of view of what other ways he expresses his objectives on Saturday in a conference call. 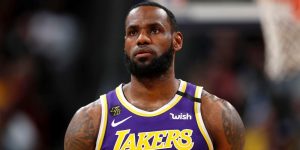 Explaining his side Lebron said “I actually didn’t go with a name on the back of my jersey,” James told reporters. “It’s no disrespect to the list that was handed out to all the players. I commend anyone that decides to put something on the back of their jersey. It’s just something that didn’t really seriously resonate with my mission, with my goal.”

James said ” I would have loved to have a say-so on what would have gone on the back of my jersey, I had a couple things in mind, but I wasn’t part of that process, which is okay. I’m absolutely okay with that. … Everything that I do has a purpose, has a meaning, so I don’t need to have something on the back of my jersey for people to understand my mission or know what I’m about and what I’m here to do.”