Democracy has lost its “Fourth Pillar” 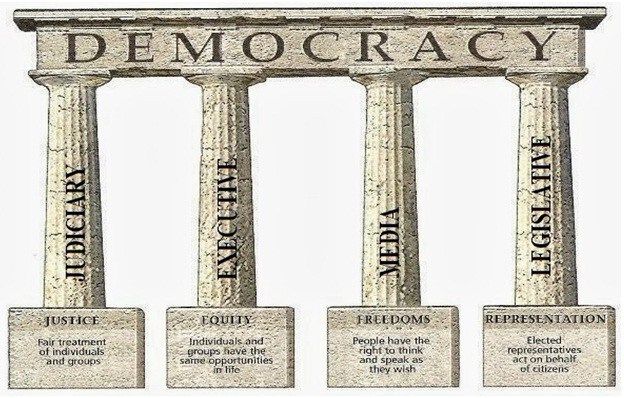 Do you think Media in today’s time is performing its duties as it should? Do you think media still is the fourth pillar of the democracy of which the biggest role is to be the watch dog of the government and keep a close check on the functioning of the government and its leaders?
In recent times, not only in India but also worldwide leaders are increasingly bringing in their hegemony,  showcasing power wantonly to become the sole authority. To that end, they try and manipulate media to meet their political ends and stay clean in the eyes of their voters.
These leaders are basically trying to use media as a tool to keep a constant focus on themselves, all the while building a stainless image.
Recntly, there was an article in The New York Times on Authoritarian Governance where there was a description of how these type of governments work.
According to the article, the ruling parties of such governments try and erase the opposition’s voice in a slow, orderly fashion.

But care is taken that they don’t eradicate the opposition fully all at once because if that were the case, the faith of civilians in democracy may falter.
The article stated that the ruling powers first demean the opposition, and with the help of the media start criticizing the acts of opposition with the help of media so that the latters credibility is lost.
Clearly, Media is being used by the governments across the globe to meet their ends.
Now, let us see how all this propaganda set up by the government works on the common people who watch, read and follow media assuming it to the truth.
People follow media for their daily updates about what is happening in and around them in their surroundings, in their country or across the globe and that is for what and where the government uses media, “to change and manipulate the perceptions of the common man.”
For example, If we talk about two prominenet world leaders who have, in part, achieved what they have just by being in the media – Mr. Donald Trump and Mr. Narendra Modi, would it be wrong to say that they are what they are because they used the media rightly?
Did their speeches, the connect to people, ads, and campaigns, to name a few methods, using social media against the opposition work in their favour?
But of course, in politics, as in life there is a catch.
In return, the journalists covering the leaders are ‘looked after’ by leaders and showered with gifts, timely tid-bits of information and so on.
On the other hand, a section of upright journalists aren’t allowed to freely cover the issues prevalent in the society.
Why is it so? Why is there such an anomoly?
And now, a  new trend, one of grave concern, threathening the very edifice to the right of speech has begun taking shape.
Anything spoken against the government and its functioning is deemed Anti – National.
And that in essence is how the authoritarian government works and uses its power everywhere when needed.
Therefore, media has become a tool in the hands of the  government for its advertisement and propaganda to mislead and manipulate citizens with false and biased information rather than the fourth pillar of democracy which aims to show the truth and watch every action of the government judiciously.