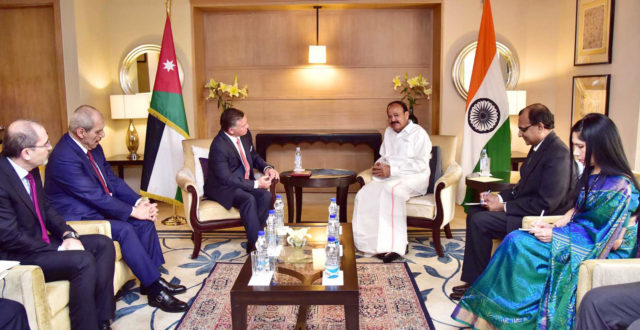 India desires peaceful, friendly and cooperative relations with Pakistan and stressed that Pakistan must give-up support to cross-border terrorism. The Vice President of India, Shri M. Venkaiah Naidu said this while he was interacting with the King of Jordan His Majesty Abdullah II Bin Al-Hussein, here on 1st of March.

The Vice President said that he was very much impressed by insightful thought provoking and constructive speech of the King of Jordan His Majesty Abdullah II at a conference on ‘Islamic Heritage: Promoting Understanding & Moderation’, today at Vigyan Bhawan. He further thanked the King for his comments – “Global fight against terror is not a war against any religion; it’s a war against hate and violence. Humanity unites all religions; and Ideologies of hate distort the word of God to stir conflict. We need to spread message of peace and love”.

The Vice President said that India demands a UN Resolution on India’s initiative for Comprehensive Convention on International Terrorism. He further said that India’s policy on Palestine is independent and consistent and India is committed to be a useful development partner. India supports comprehensive political solution in Syria taking the aspirations of the Syrian people, he added.

The Vice President said that India is moving ahead with the Prime Minister’s slogan of – Reform, Perform & Transform. He further said that programmes like GST, Make-in-India, Digital India, Smart Cities, Start-up India, etc are bringing strategic shift in India’s economic progress. India has 65% of young population below 35 years of age which is called the ‘demographic dividend’ for India and they are the future of aspirational India, he added.

The Vice President thanked His Majesty and the Government of Hashemite Kingdom of Jordan for their unequivocal support to India’s right place as a permanent member of the expanded UN Security Council. He also thanked for Jordan’s support in election of Indian candidates for various UN Bodies (International Law Commission, POC of UPU, Council of ICAO and International Court of Justice).