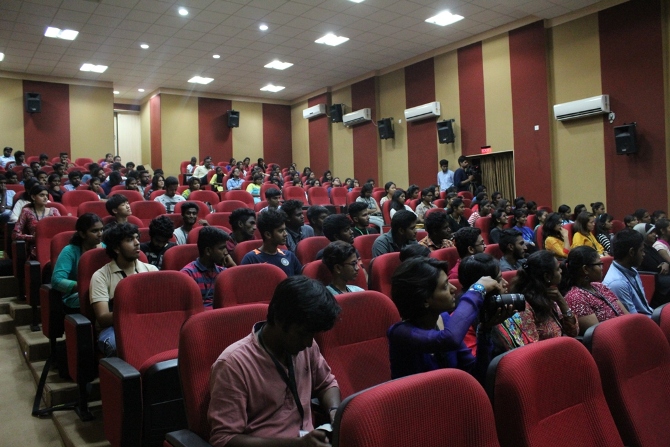 Department of Journalism students in Madras Christian college Chennai launched a social awareness campaign on Mental health and depression which is titled “Hakun-a-Matata” meaning “Never give up”. The campaign has been scheduled and divided into 4 days. Despite of the duration of campaign, the student’s participation was proactive in doing their activities for an event. One of the major reasons behind the campaign was their title ‘Hakun-a-Matata’ which is necessary for the teenagers and college going students having symptoms of mental illness ,stress or depression. Studies show that 15-29 was the most prominent age bracket of children facing such symptoms as well as attempting suicide. This made the students do a campaign on spreading awareness about mental health and depression.The first day i.e. March 7, 2018, this campaign was inaugurated .The great panel of this day was encompassed with famous Tv anchor, journalist Mr.C.Gobinath. Dr.M.Baluswami, Director of Shift II addressed the Chief guest followed with the introductory speech given by Ms.Rachel Jacob ,Head of department of Journalism. After this, there was speech given by Chief guest and he had an interactive session with the students by sharing his experience of media where he worked as a journalist and tv anchor. He also shared his views about various topics by explaining about depression and mental health. His speech was motivational for the students and further helped the students in knowing a better idea of the career as well as stress and depression. He quoted the words of Pranav Roy “Don’t try to be first ,try to come up with correct material” when working as a journalist. The students displayed active participation by asking questions to chief guest and they had a perspective from his speech. He concluded the speech by giving statement “You need to question everything. You are here to explain the fact, your job is not only reacting.” A screening session was held after the speech given by the chief guest where he shed light on the positive thought process imperative to beat the negative thoughts of an individual and how to overcome the ups and downs of life.The event continued with a panel discussion and ended with a street play. The discussion was on the topic of Mental health and depression where mental health experts were invited to share their experience of working with adolescents. Ms.Shilpa Grace Samuel, school counsellor and department co-ordinator prime India healthcare solutions pvt. Ltd. ,Dr.Saravanan, Asst.professor department of psychology at Pondicherry university, Ms.Vinitha Shah ,Counsellor and Trainer, Parivarthan ,Ms

.Tuba, principal correspondent of DT next contributed in the same. In the discussion, Dr. Saravanan explained about mental health and emphasized that it is about how one handles the day to day activities. Also, he mentioned some of the case studies related to the topic. Ms. Vinitha Shah highlighted on suicidal thoughts and stress management of individual along with how to handle situations. She says “In human relation, there is no cause and effect.” Ms. Tuba explained about the challenges faced by journalists, their mental health and how they manage it according to the circumstances.The session of panel discussion was concluded by an interactive session with the experts. Overall event was sealed for the first day with a street play which was done by the students to spread awareness through folk media