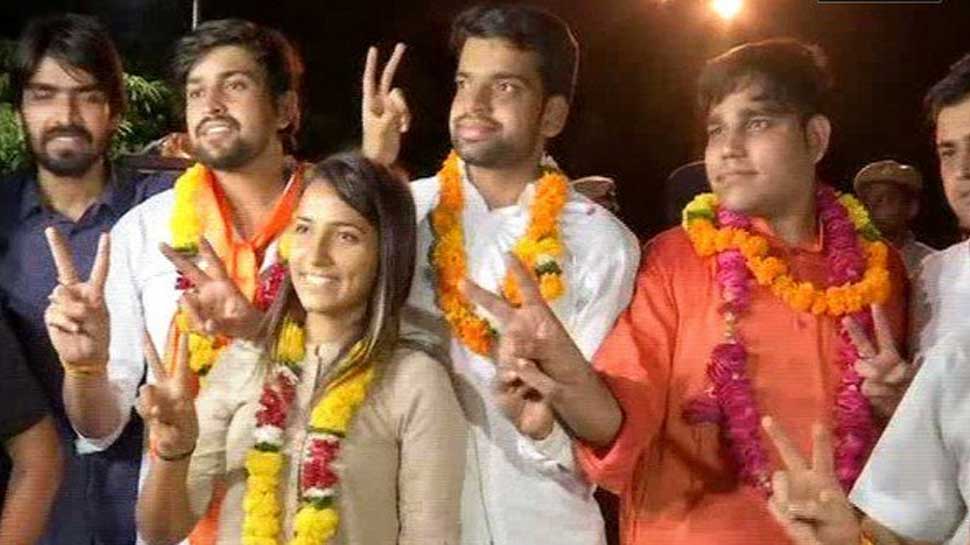 ‘Students and youth should discern and raise their voice against the brutal execution of the democracy by ABVP by overthrowing the democratic values, dismissing the mandate of the students, exploiting the power of administration as well as misusing the EVM,’ NSUI president Fairoz Khan said in a Tweet.

The results signalled a comeback for the ABVP. Last year Rocky Tuseed and Kunal Sehrawat of the NSUI had won as president and vice president, and the ABVP’s Mahamedhaa Nagar and Uma Shankar as secretary and joint secretary.

Before that the counting was suspended midway on Thursday due to “faulty EVMs and the students’ uproar over it.” The counting was initially stopped for an hour when there were allegations of faulty EVMs, however, following objections by students the election officials decided to suspend the counting. In the initial trends, Congress-backed NSUI was leading for the president post, while BJP-affiliated ABVP was leading for the vice president’s post eventually ABVP got victorious. Amid heavy police presence and some last-minute wooing of voters, DUSU polls were held yesterday with a voter turnout of 44.46 per cent. Polling took place at 52 centres in the colleges. There were as many as 23 candidates in the fray.

Meanwhile a plea has been moved in the Delhi High Court on Monday challenging the election results. The plea filed by three candidates alleged that EVMs were tampered with and questioned how “privately procured” EVMs could have been used in the polls held on 12 September. The candidates sought securing of the Electronic Voting Machines (EVMs) used in the DUSU elections. The office of the Chief Electoral Officer in Delhi on Thursday last said that EVMs used in the DUSU election were not issued by the Election Commission and seem to have been procured privately.