Civil Defence personnel of Southern Railway had their moment of pride when their General Manger John Thomas showered praises on them in recognition of their services.

He said this during the valedictory function of 54th Civil Defence Week on 17 December. The celebrations took place at Railway Institute at Perambur in Chennai. 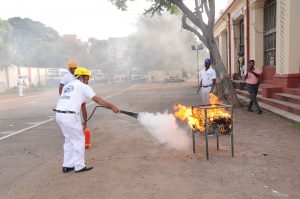 Their service is prompt and their deeds during real-time crisis helps keep problems away, he said.

He stated that Civil Defense wing protects people from unforeseen calamities and accidents. He advised the personnel to work cohesively and pressed for intensive training and fine tuning of their knowledge and skills.

He called for a cohesive compact unit to provide prompt delivery of services during dire situations. A demonstration on fire rescue was conducted.

General Manager declared a cash award to the volunteers in appreciation of their exemplary show of Civil Defense skills. An exhibition was also held at Perambur Railway Institute.

The Civil Defence Organisation of Southern Railway was formed in the year 1964. It has rendered a helping hand in the rescue operations in many a natural calamity such as Lattur Earthquake (1993), Bhuj Earthquake (2001), Tsunami (2004) and Kerala Floods (2018).