Institute invited top international researchers in Cognitive Modelling, which deals with theories on how people think and make decisions and are implemented through computer simulations

Indian Institute of Technology Mandi became the first institute in India to host a ‘Winter School on Cognitive Modeling,’ inviting national and international researchers and professionals to train students on the best practices in the area of cognitive modelling. The Winter School was hosted by IIT Mandi from 4th- 10th February 2019.

Cognitive Models are essentially theories of how people think and make decisions, implemented through computer simulations. Integrating Artificial Intelligence (AI) and Machine Learning, cognitive modeling studies human cognition by creating models of behaviour in both basic and applied domains. Cognitive models can aid researchers to understand how people make decisions in novel situations such as driving a car or trading in a stock market. These decisions are often based on prior experiences and emotions. Cognitive models can also be used to explain how people make errors while performing in a number of decision tasks. Some of these tasks may involve allocation of resources, control of quantities to goals, negotiations among several individuals, and making choices in real-world situations involving risk. 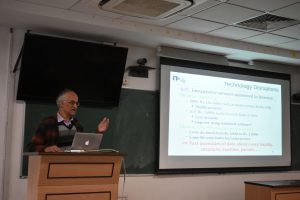 Delivering the Welcome Address, Prof. Timothy A. Gonsalves, Director, IIT Mandi, said, “The AI and Cognitive Modeling fields will see rapid growth in a world where computing technology is growing exponentially due to Moore’s Law.” Prof. Gonsalves mentioned low-cost landslide monitoring technology and the FarmerZone project as two of several examples of how IIT Mandi is leading AI initiatives for the benefit of the Himachal and Indian society.

Dr. Marieke van Vugt discussed how accumulator models allow us to draw important insights about an individual’s decision-making strategy (such as whether the individual tends to be slow-and-accurate or fast-and-often-wrong) out of data from simple cognitive tasks. She also gave insight into how cognitive models can be applied to understand how depression works, and what the effects are of meditation on mind and brain. Furthermore, Dr. Terrence Stewart emphasized the use of tools like Nengo, which could be used to define different neuron types, learning rules, optimization methods, and reusable subnetworks to build large-scale brain models. He also mentioned how interdisciplinary researchers from diverse fields could come together to answers questions about human cognition and brain.

Speaking about the impact of Winter School 2019, Prof. Varun Dutt, Assistant Professor, School of Computing and Electrical Engineering, IIT Mandi, said, “the School provided participants from diverse backgrounds an exposure to different models and tools including instance-based learning theory and ACT-R, which could be used to model people’s decisions in a wide variety of basic and applied domains.” Dr. Dutt also emphasized the use of tools like PyIBL to model people’s thinking and decision-making in different real-world problems involving complex dynamics, time-delays, and uncertainties.

The Cognitive Modelling Winter School at IIT Mandi is based on pedagogic models established in the US (Carnegie Mellon University’s yearly ACT-R Summer School) and the Netherlands (University of Groningen’s yearly Cognitive Modelling Spring School). This year’s Winter School at IIT Mandi extended this tradition to Indian participants, where 75 applications were shortlisted for this year’s School from a large pool of applicants. The Winter School was supported by the University of Groningen, IIT Mandi, and Hospimedica.

Setting the context for the next edition of the Winter School to be hosted at IIT Mandi in 2020, the Winter School 2019 concluded on a promising note to build a community of next generation researchers in the field of Cognitive Modeling, encompassing sessions conducted by global experts, who are also the very creators of these cognitive models. Leading experts in this field from IIT Mandi included Dr. Varun Dutt, Dr. Shubhajit Roy Chowdhury, and Dr Arnav Bhavsar, School of Computing and Electrical Engineering, IIT Mandi.