P-UTS is all for commuters 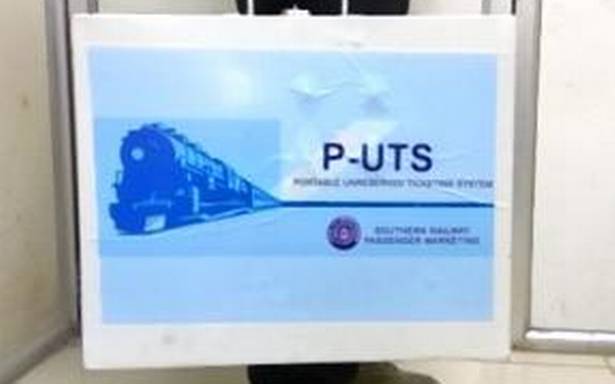 Imagine if one has been into this city for attending a popular event, a religious function or a trade fair. Taking part in it will swipe all his energy, he has to go to the nearest railway station and battle a long que again to reach his destination only to make themselves more tiresome.
But soon such travellers will have something to cheer about, thanks to Southern Railway. Frequent travellers like T Satyamoorthi, a marketing agent who resides in Kanchipuram will be a relieved lot. He often travels to the big city for some event in this city or the other.
Such people will not have the need to go to the nearest railway station and battle long ques and buy a ticket for a train back to his home. He can purchase a ticket (unreserved) at the spot of the popular event, travel to the nearest station and get into a train back to his home.

Soon, there will be P-UTS (Portable Unreserved Ticketing System) machines at the place of popular events from where people can buy unreserved train tickets. A person authorised by the railways will be at the popular event spot who will be operating this machine and selling tickets.
A senior railway official said the proto-type of the machine has been put on test for last one month. And they have sent it to the Railway Board for approval. After that, the machine will also be tested by CRIS, after all the procedures are done, the it is likely to become a regular feature, said the official.
This machine will have all the features that the equipment at a ticket window at any station will have, a screen, a ticket roll, a thermal printer and the railway software, the official reminded. This innovation can also be to resolve the issue of railway press-issued cardboard tickets at smaller stations, which are also known as ‘halt stations.’
Some of the halt stations in Chennai division are Annanur, Royapuram. An agent sells tickets at these stations and common complaint is that tickets frequently run out. For local passengers, Railways has already introduced UTS on mobile App which helps them to book tickets on the mobile phone without even standing in the ques. While this is gaining popularity, this new innovation is also hoped to achieve fame on same parlance.