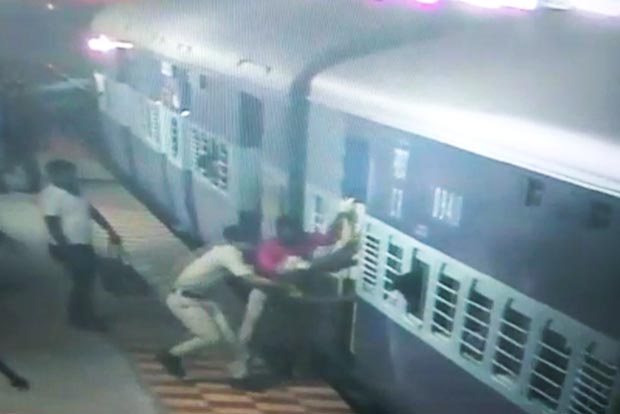 Pradeep Kumar, an RPF constable at the Tambaram Railway Station in Chennai saved the life of a senior citizen recently

The incident happened on Platform Number 5 on April 10 when the constable’s timely response and alertness averted an untoward incident.

The incident took place when an elderly woman tried to alight from the compartment of the Salem – Egmore Express which arrives at 3:04am and leaves by 3:06 am at Tambaram daily.

When the woman tried to get down the compartment, the train started moving for the next station i.e Egmore, according to RPF constable Pradeep. The luggage of the elderly women had been kept on platform by a fellow passenger and while she was trying to get down the moving train, she lost her balance and slipped into the space between the compartment and the platform.

But an alert Pradeep Kumar went into the rescue mode sensing the situation of the women traveler. “Though I caught hold of the passenger, thing was not that easy as the train was already in motion, so I had to run along with the train to a certain distance and then stabilised my hold over her and pulled her to safety. It is quite common for passengers to get down in similar way as the arrival and departure of the train is such that people are usually asleep,” Pradeep Kumar said.

Though holding people and saving them is not new for this constable, the event of rescuing the elderly woman is quite different.

I have helped people stabilise by holding them when they were trying to get down on platforms after unsuccessfully making an attempt to board trains on many occasions. But in those cases, passengers were never pulled to such an extent like how the elderly woman feel into the space between compartment and the platform.

Had it been a bit late, the senior citizen passenger would have met the uneventful”, he reminded. The rescued passenger quickly recovered, though she was a bit upset in the beginning.

I enquired with her if things were alright with her, she replied yes, and left home a little while later. The good work and bravery of RPF Constable Pradeep Kumar have been praised and recognized.

Pradeep received a certificate of merit from Chief Security Commissioner of RPF on the next day. And then from ADGP (Railways) Sylendra Babu on 16 April. His name has also been recommended for a reward, said a senior RPF official.

I want to save more lives in the future, says Pradeep reminding that the service motive is not new in his family. Many of my relatives are in uniformed services already with a motive of serving the society.

My relative’s son Rajesh Yadav who is in the Navy motivated me to join RPF explaining me that joining the force is the apt way to serve people.