In the face of climate change events, strong communities are the basis for better resilience, said Prof Ismail Serageldin, Founding Director, the Bibliotheca Alexandrina, New Library of Alexandria at the Millennium Lecture held at M S Swaminathan Research Foundation today. And to design activities for resilience would require a lot of science, and that involves both social science as well as natural sciences, he said.

In 2015, at the height of public awareness among world leaders, countries signed agreements on three areas namely the UN Sustainable Development Goals, the Paris Agreement for Climate Change and the Sendai framework to lower and minimise disaster risk. However, “We require regional and local level actions for global policies”, Dr Serageldin said. 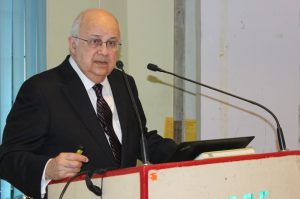 Recent times have been marked by a variation of extreme events, for example the hurricanes that lashed the West Coast of America while in the East, regions like California was burning with droughts and forest fires. In the future, storm surges could become more regular caused by sea level rise, the African continent could face increased droughts, while the Arab world would experience a rise in heat dust and water scarcity. “The wars of the next century will be on water, while the wars of the previous centuries were for oil”, said Prof Serageldin, highlighting the example of Syria, where over the course of 30 years the water table has kept decreasing by 1m every year.

Another area is vulnerability which can be exacerbated by climate change events. According to World Bank estimate, 1.44 billion people live in extreme poverty on $1.25 or less a day. Poverty has many dimensions which are not captured by the poverty line, and Prof Serageldin spoke of absolute poverty as a “condition beneath any definition of human decency”, a term that was originally given by Robert S McNamara in 1973, the then President of World Bank,  and said it must be abolished immediately. “Although we have reduced the poverty by half, it was over a 15 year period, and we need to do a lot more”. Climate change could however push people back into poverty, he warned.

The other areas he felt required focus were that of addressing inequalities that have exacerbated in recent times and also addressing the problem of refugees from both conflicts and climate change. Although there is money available to fight the issue, awareness is essential for the policy makers and the general public, he said. 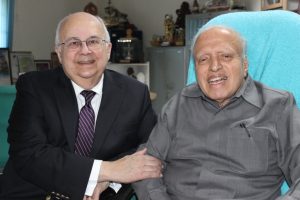 Prof Swaminathan, Founder, MSSRF, thanked Dr Ismail Serageldin for his comprehensive talk and said that in 1990 itself, MSSRF had initiated steps for resilience for sea level rise with adaptation and mitigation measures with the mangrove conservation project along the Coast of India. Dr V Selvam, Lead, Coastal Change and Climate Change also spoke on the occasion.

Dr Ismail Serageldin is the Founding Director of Bibliotheca Alexandrina, the new Library of Alexandria. He serves as Chair or Member of a number of advisory committees for academic, research, scientific and international institutions and civil society efforts, including as co-Chair of the Nizami Ganjavi International Center (NGIC), and serves on the Advisory Committee of the World Social Science Report for 2013 and 2016, as well as the UNESCO-supported World Water Scenarios (2013) and the executive council of the Encyclopedia of Life (2010) and Chairs the Executive Council of the World Digital Library (2010). He has held many important international positions, including Vice President of the World Bank (1992-2000), and Chairman Consultative Group on International Agricultural Research (CGIAR, 1994-2000). 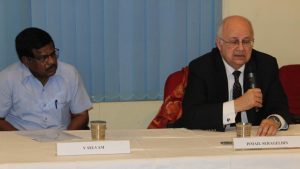 Dr Serageldin has published over 100 books and monographs and over 500 papers on a variety of topics, he holds a master’s degree and a Ph.D. from Harvard University and has received 38 honorary doctorates.