S Vishnu Sharmaa, INN/Chennai, @infodeaofficial
Mahindra Ecole Centrale (MEC) College of Engineering, Hyderabad organized its annual centrale connect conclave on its campus. According to a press release, the theme for the conclave was ‘perspective and perception.’
The event witnessed professionals from industry and academia standing on a single platform with the primary motive of encouraging students to broaden their perspectives on society while allowing them to use the knowledge to develop innovative ideas that can be used as solutions to solve problems faced in the real life. 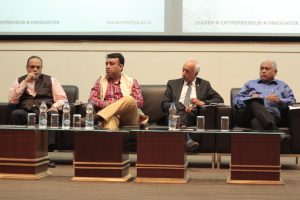 Through this event, we aim to engage with the idea of an alternative or different ways of looking at handling issues. Mahindra Ecole Centrale is happy to host a very high profile guest list which will deliberate on key perspectives like perception towards inclusion and perception towards life.
We expect to encourage our guests and audience to explore these aspects of the real world and understand their impact on individuals and organizations, said Yajulu Medury, director, Mahindra Ecole Centrale.
Shashikumar Sreedharan, MD, Microsoft India spoke on the impact of digital technology and artificial intelligence and how it has integrated into our lives today.
During the first panel discussion Kannan Srinathan, associate professor at IIIT, Hyderabad focused on the effect of clarity of purpose and education on the theme. Nikhil Agarwal, senior advisor to FICCI BISNET said that education is important and the infrastructure for it is even more important.
SriniKaveri, Director of the CNRS said that true inclusiveness is when no one is left behind in the wake of progress.  Venkat Changavalli, the advisor to the governments of Telangana and Haryana, described how good leadership is essential to making inclusive projects possible.
The second-panel discussion dealt with the ideals that form the basis of Indian society and focused on questions of success in the Indian context and landscape of engineering as a profession in India.
Vidyanand Jha, Professor at IIM Calcutta opened the discussion by saying that the idea of success varies from person to person and that engineering should be promoted as a profession instead of a stepping stone to other professions.
Raju Venkat Narayan, VP of Simpsons and Co said that success varies over time. At the beginning of one’s career, it is about money but things invariably change. Namrata Rana, director of Futures cape, said that in order to build, an engineer must have a breadth of knowledge. Building things with enduring value is a measure of their success.

Jayati Dwivedi, head of recruitment at British Telecom, strongly stated that the key to success is having a passion for one’s work. This will motivate people to enhance their knowledge in their fields of work, she said.