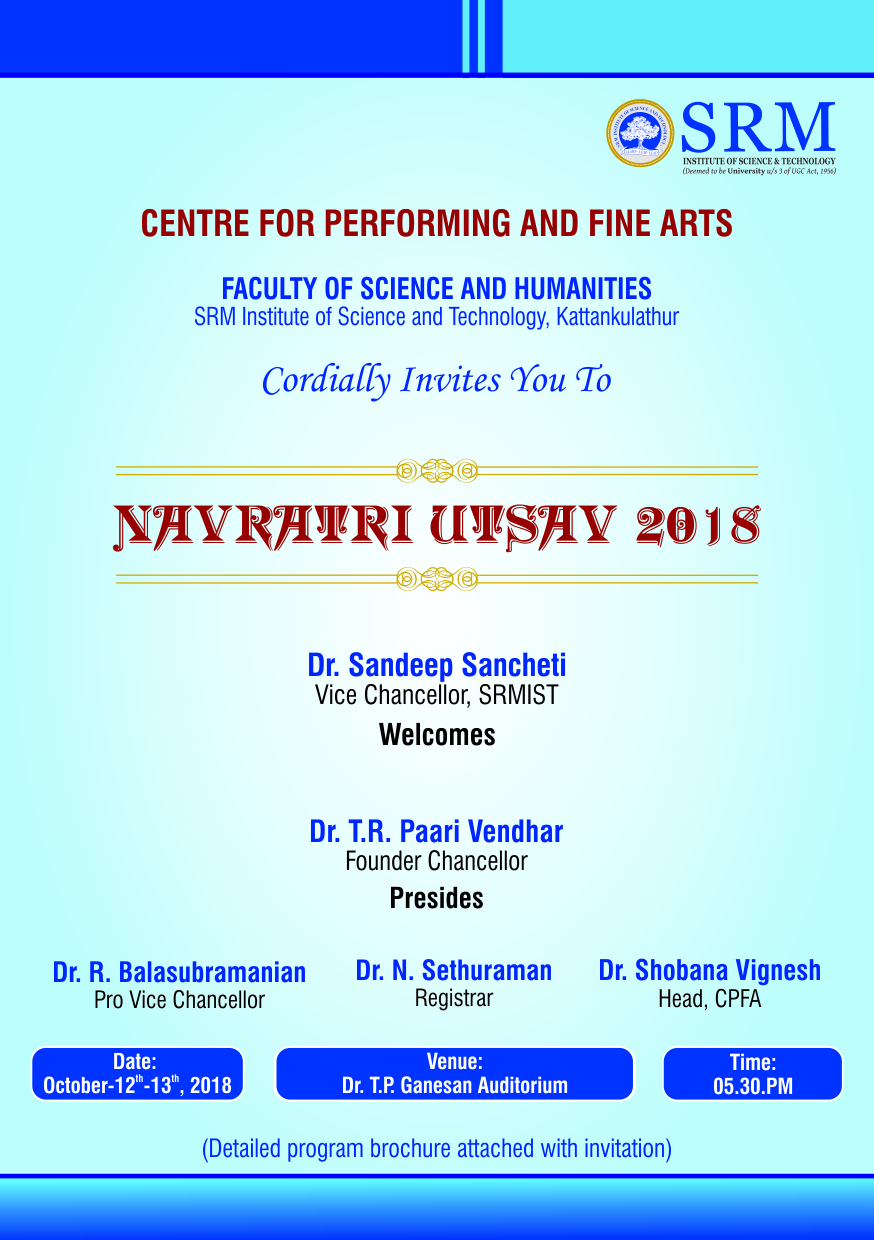 Navaratri Utsav 2018 to delight everyone

There is something special about Navaratri Utsav 2018 being organised at T P Ganesan auditorium on the SRM Institute of Science and Technology (SRMIST) premises at Kattankulathur near Chennai. The inaugural music programme will feature Grammy award winner Pandit Vishwa Mohan Bhat.

INN/ Chennai, @Infodeaofficial
Navratri Utsav is being organised by Centre for Performing and Fine Arts on 12 and 13 October. The event will begin with a Jugalbandi on 12 October where the Grammy award winning musician will be a part of it.
Along with the popular musician will be the young Violin maestro, Ambi Subramaniam. He is seen as the ‘New King’ of Indian classical violin and India’s Itzhak Pearlmann. Ambi has performed across the globe.
There are lot of programmes during the two day cultural extravaganza that will fulfill your craving for good music.
Following the classical musical rendition comes the ‘Trishakti- Dimensions of Devi,’ a performance involving popular dancers of Bharatanatyam, Odissi and Kathak. The former director of the Kalakshatra Foundation Priyadarshini Govind who is known for Bharatanatyam, Sujata Mohapatra, a distinguished danseuse of Odissi and Vidha Lal, a Guinness record holder and a multi-faceted exponent of Kathak will entrall the audience.
Navaratri Utsav’s second day too will be no less entertaining. On October 13 there will be a classical confluence of Shobana Vignesh and her ensemble. Shobana Vignesh is the head of the Centre for Performing and Fine Arts and is one of the leading carnatic vocalists and recording artists in India and has over 150 Albums to her credit.
Next will be the Colours of India featuring Bharatanatyam by Priya Venkataraman, Kathakali by Kalamandalam Manoj, Mohiniattam of Jayaprabha Menon, Kuchupudi by Prateeksha Kashi, Kathak by Meghranjani Medhi and Odissi by Vrinda Chadha. The best part of the event is the admission for it is free, every music lover in Chennai can get there to fill their souls with rich legacy of music and dance.