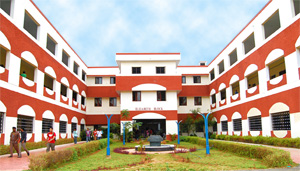 HCAS  Media Department conducted a lecture given by S. Sundar Rahjan,  Co-director of Naigal Jakkirathai, tik tik tik and Miruthan,  and a student of Famed Balu Mahendra Institute.  Mr. M.P Prabhu the HOD Department of Media studies welcomed him and said he is happy to invite him and expect a lot of experience to come out of this gathering.  He is an eye opener in film making and this session will lend a helping hand in this direction and thanked the department.

The chief guest Sunder Rahjan is a graduate of Viscom course at St. Thomas College, Chennai and went on to do Mass Communication course and Film Making course in Balu Mahendra Institute, Ms. Saranya, a faculty member did the introductory speech.

And while Mr. Rahjan said he is happy to address media students as he himself is a Viscom graduate, stating that one should have a good mind set at this stage itself  because there are so many complications and obstacles in film making and it is a small industry.  He became Associate Director in Thalaimuraigal handling all aspects of film making later.

Director Balu Mahendra used to make him to do all work and in film industry you need to project yourself.  He  spoke on stages of film making and promotion as he handled script location and all that and said the training in institute is the time he decided on film making.  He spoke on process of film making time  in need and had demonstrated splitting time for location artist work etc. Co-ordinating with cinematographer and he  mentioned clarity and  of alternative plan as he spoke on editing and nuances of editing sound effects as sound engineer is important.

You will learn from film and you will learn it continually and we can speak one whole day as he said on process of acquiring permission from several authorities as the team got to get clearance from Animal Welfare board for Naigal Jakkirathai  spoke also on budget as he showed clips from Tik Tik Tik Naigal Jakkirathai and others as he ended.

The   Principal Dr. S. Thirumagan said he got two feelings as why he left the guest lecturer’s beginning of his speech.  He appreciated Mr. Sunder Rahjan as there is complete attention from students while saying all aspects of film making.  Dr. Thirumagan  said Mr. Rahjan has spark ,he can achieve a lot in film industry as involvement is important.

He  recalled old timers in film industry as he spoke and said Mr. Sunder Rahjan makes an ordinary person to act a rare skill and said his experience on actors or acting as he sees it. Suitability is a requirement that of film and spoke on actors Suriya’s Pithamagan film as he feels that Vijay Sethupathi can do really well in today’s industry.  Quality of director is not to mix up with ordinary as there are many reasons for becoming actor or director as actor Suriya will surely become one , he is a dedicated personality.  Talented people enter film industry as anyone can enter as he praised the HOD and others as many students asking questions to guest lecturer.

One needs three Ss  as S – stands for self assessment, self analysis and self achievement, as criticism of self helps in becoming a success easily. He praised actor Dhanush in singing a song and said of 3 Ss as he ended.