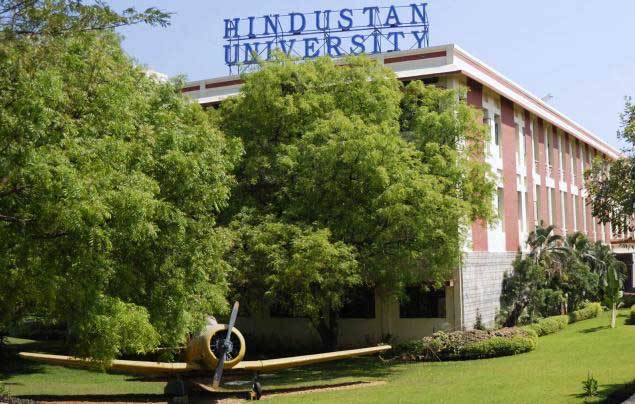 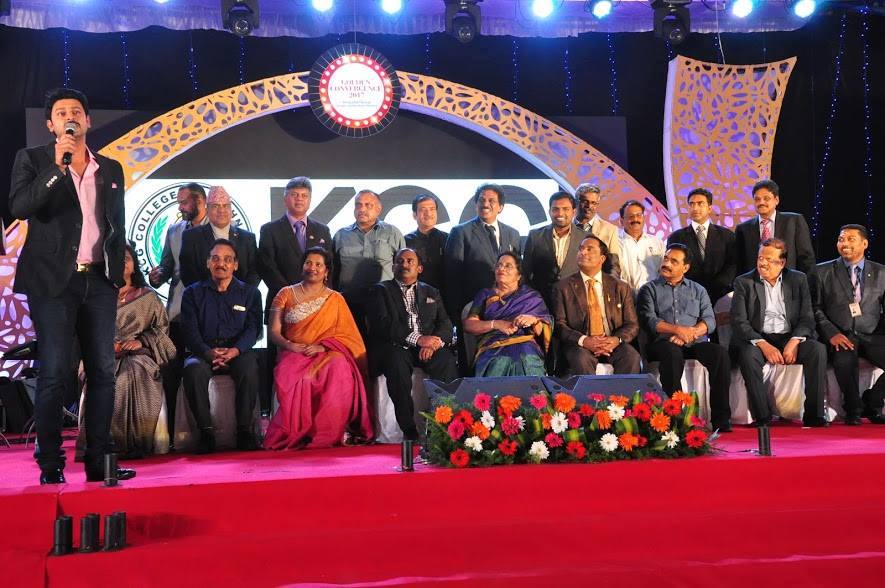 Mr. Chandra Saravana Muthu HCE alumni spoke first as he greeted Chairperson Dr. (Mrs.) Elizabeth Verghese , principal presented a bouquet to Mr. Anand Jacob Verghese Dean and CEO and to Chairperson Dr. Mrs. Elizabeth Verghese. He said that this day was important as it is Prophet Mohammed’s birthday as well as Hindu’s festival of Karthigai Deepam as Hindustan Group of Institutions have come a long way. As HCE alumni association was formed in 2014 and Fly wheel started as early as 1971, he was a very old student of HGI as he was taught by Dr. KCG Verghese, late chairman. In HGI he met another aeronautical pioneer Periasami who also got training from Dr. KCG Verghese as he relishes strength waves and bonds of this college. Present Communication technology helps also in job opportunities as counseling is also a requirement as we need each other.He thanked everyone wishing Hindustan Group of Institutions a long way ahead

This was followedas Tamil Thai Vazthu and lighting of Kuthu Villaku came next as Captain Azir of Spice jet came next to speak. Mr. Asir while addressing has said that he bring a lot of memories as pilot as he looks behind to say came from a small place and had privilege to fly a big air craft as 747. He met Dr. KCG Verghese got training in HIET at age of 32 he became pilot in 10 months time as he has lot of memories of him, who gave Rs. 10,000,recalling him a person of generosity who had bundle of currencies as well. He came to HIET as he failed in textiles and engineering education and joined Orient Flight School pursued course succeeded.

Mr. Anand Jacob Verghese Director & CEO of Hindustan Group of Institutions wishing the gathering said that HGI has 1500 alumni and it is his immense pleasure to greet all, a life time moment for him as he was in all institutions. This meet was being held to stay in touch with alumni graduate students former teachers who took expense and time to come out of busy schedule as Alumni came from as far as Malaysia. Today  HGI has student strength of 15,000 and a staff of 2000 was established  5 decades ago as a small, struggling institute.  Alumni of HGI hold key positions in business industry commerce government and contribute to development of society. This meet was conceived 6 months ago, thanks given to Madhuri and  others in making it a success, he added.

Mr. Ramakant Singh, Government of India an alumni of HGI an important member of Agni missile program spoke following Mr. Anand as he received HGI excellence Award.  He is 56 years old feeling as 21 years old saying he became first conversation with Dr. KCG Verghese in 1983. He recalled his conversation had with Dr. KCG Verghese who spoke on Madras, India citizens and political leaders here comparing to humanity as Mr. Ramakant is from Bihar.  Famine came in 1967 as Dr. KCG Verghese gave food stuff to public had started low cost education as Mr. Singh got Rs. 3500, as Rs. 500 spent towards buying books and it was low cost engineering education.  In 1986, in Mumbai, he met Mr. N.S. Venkat Raman, a mentor who asked him what for governance reversal as solution is still possible in many situations. He spoke on preventive steps to safe guard human society human civilization as his mentor Dr. KCG Verghese spoke sometime ago as he wished for Ram Raj.

Col. Deepak, an alumni of HIET as he delivered his speech said that this institute is one of the best and told a parable to cite success, recalled importance of motivation.  Motivation is 40% of work as he recollects his visit to French Aerospace Toulouse to receive an award, also won President of India APJ Abdul Kalam prize also says that Dr. KCG Verghese encouraged dedicate it to him

Mr. Chandra Saravana Muthu a 1973 alumni took his award, said that it was an opportunity to be with chairman to receive flying license on low budget. He recollected some experiences of being into sea and  a pilot thanking Dr. KCG Verghese for such an experience donates Rs. 2 lakh to help younger generation to study this course

Mr. K.T. Sadasivam 1978 alumni recounted his days of 1976 particular occasion to a slum surrounding him.  He had done air craft engineering, a very new one very strong in this college passed out, proud of HETC like a family member.

Mukund Natarajan, AMIE Executive Director of Air India said HIET made him a great success and had wanted to study AMIE after graduation in 1977.  Fee was not a problem he still remembers.

Dr.Mrs. Elizabeth Verghese wife of late Dr. KCG Verghese said that she joined HIET late as she was in government service.  He started HIET found a lot of money, education was very cheap, used to get 4 rupees per hour as it was not government recognized program.  He could not get into government to do AMIE as education that was not possible or not acceptable to all.  You have to book a school admission before your child is born, book medical education as  to common men higher education was not accessible. Education is modernity  a bridge in national development as it alone can take country forward as we enjoy 25 or more years  of freedom since independence.  HETC was our first child pampering way to progress, lot of progress made student community part of HCT.  She recalled her daughter in law and Director Annie Jacob who was a student alumni of KCG College of Technology’s contribution to this institution building and thanked her while Dr. Susan Marthandon, her daughter, played pivotal role in HCAS being very active.

While speaking on quality of education she is of opinion that there is very tough competition and complained on its standards as quality is a important parameter in education.  HIET alumni are in higher positions in Malaysia Singapore as also in other places around world as she recalled motto of Dr. KCG verghese.  Due to influx of social media or personal media, she said that there is distraction among youth, she added. She requested to make contribution to charitable trust to carry on this missionary work and appealed to all alumni as Tamil actor Srikkanth, Malayalam Film industry Mr. Viju Verghese Mr. Vini Srinivas and others. She spoke of Air Taxis as private airlines flying in many cities as taxis on roads, Mr. Rajiv Gandhi former PM in HIETs work or actions and wished all well.

Big Boss Mr. Arar came to dias extended wishes to everyone sees this as a great opportunity

Mr. E.Baskaran,  HIET alumni, serving in the  Department of Commerce and Industry Government of Tamil Nadu while addressing gathering said that Dr. KCG Verghese encouraged a lot as he had done work on robots, materials, patents and thanks college  for laying foundation that is good as he has authored 22 books, also on syllabus committee.  He said that if entrepreneurs want to start businesses he can ask micro finance banks for loan as he has got  best entrepreneurship award.  He encourages women entrepreneurs concerned to start businesses or industries as tech know how is available from Government of Tamil Nadu, he said.

While Captain Asir did receive award saying not a day goes without thinking of Dr. KCG Verghese, the founder of HGI he  said

Mr. Jagadeswaran, 26 IFS 1978  a collector spoke in Tamil was proud of education, as he recalled the chairman’s saying everyman a success no man a failure.  Because of education only in a uncertain political situation in 1986 India managed well and looked forward to platinum golden jubilee  celebrations he added

Mr. Srikkanth alumni of HCAS 2000 CSE spoke in Tamil said he is grateful to Tamil people, Tamil Nadu, Dr. KCG verghese family, to faculties for making a success.  What he likes about this college is modernity as Dr.KCG verghese, his college is all about as he recalls a culturals  of HCAS  1976-77 in which he took part paving way for his movie career as he gone into modeling and acted in Roja Koottam   movie.

Mr. Srikkanth spoke of academic discipline of college praising it as he had to work his way through Mr. Ashok Verghese  because he came too few classes in final year.  It seems it took some weeks to get work done before being allowed to write exams thanking Mr. Ashok Verghese and college for making graduation in BSC computer science possible.  He sang a song from his film to entertain  gathering towards end as everyone applauded.

Mr. S. Ramachandran Vice Chancellor of this college delivered a vote of thanks as he said it took 6 months for meeting   officials of  college several times to plan this event. He thanked Chairperson, Directors, Deans, HODs alumni and all who have gathered on and off dias to make this memorable function a grand success.