The BreakSec workshop is a three days seminar on Ethical Hacking and was conducted by Kruptos Security Club (KSC), Centre for Networking and Cyber Defense (CNCD) and Department of Information Technology, Hindustan Institute of Technology and Science (HITS), Chennai, on 15th, 16th and 17th of March and was participated by 110 eager students. It was initiated with a grand inaugural ceremony.

The inauguration started with a prayer by Rev. Jobi Verghese. The introduction and welcoming on behalf of Kruptos Security Club was done by Ms. Sujitha, member, KSC. The welcome address on behalf of CNCD and HITS was done by Dr. V Ceronmani Sharmila, HODIT and Head-CNCD, HITS. During the address the future of Cyber Training and its innovation was emphasized. The Presidential Address was given by Dr. N Vasudevan, Dean-Academics, HITS. He explained about the relation between machine learning and security. Mr. Naveen, Founder and President, KSC introduced the club to everyone and explained about BreakSec 2019. The chief guest was introduced to everyone by Ms. Sruthi Chandrasekaran, Core member, KSC. The inaugural ceremony was felicitated by Chief Guest Mr. Dinesh O Bareja, Cyber Security Specialist – Policy, Strategy, Planning, Operations 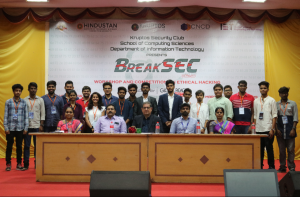 Advisers for the Government, Public and Private Enterprise, provided an inspirational speech to participants. He was addressing the participants on how the world is data driven and the growth of the data generated would be exponential in the coming future. He also mentioned how security professionals would be in demand. The inaugural ceremony was concluded with Vote of Thanks by Mr. B V Baiju, Asst. Professor, Department of IT.

The technical session was kick-started soon when Mr. Dinesh took over and started interacting with the participants, setting the pace for the whole event. The session was mainly focused on the current issues and the approaches to solve them. He was basically giving guidance and signifying on the importance of security researchers in the future. He demonstrated a small scenario where in our Founding member Mr.Rahul played a part.

After that, one of our core members, Mr.Mukesh gave a small demo on cookies and how physical security of our personal devices is very important.

Post lunch, Mr. Nitin Mukesh, Principal Consultant of Quickheal Technologies, gave a technical session which ranged from Dark Web, Onion Sites and Reconnaissance. Later on, the session involved a small demo on how to go about hosting a website on the dark web.

The day was concluded by Mr. Naveen S, spoke on the days summary and also briefed out about Day 2 and explained about the importance of Capture The Flag (CTF) challenges. 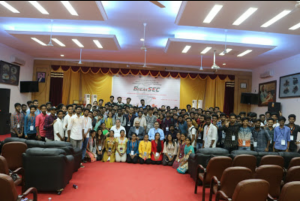 The next day was started with Mr. Naveen by introducing the speaker for the day, Mr. Arulselver Thomas, Founder and Director of Briskinfosec Consulting and Training Pvt. Ltd. Mr. Thomas started with the first session on second day and explained the general concepts and he hilariously explained the Hacker Sterotypes. He also elaborated on VAPT and how to conduct it. This was followed by a session on Disclosure via metadata, handled by one of our club members, Mr. Mahesh Rao.

Post lunch session was handled by Mr. Mahesh Rakheja, who is a Well-known Technical Public speaker; he came in with a lot of enthusiasm, energy and maintained the same level throughout his session. He elaborated on Honeypot technologies and android malware development. The Android session went on for almost three hours and the participants were very much interested and learnt a lot.

The day was wrapped up and information was given about the Capture The Flag competition for the following day.

Ms. Juhi Singh kicked off the day with a small interaction session to grab the attention of the participants, and later informing the participants on the Competition and its aspects. She also mentioned the various categories of prizes to be awarded. The CTF challenge was opened up to the participants. There were a lot of brains in action in order to understand and solve the problems set by Mr. Rahul and Mr. Naveen. Mr. Rahul explained web app and other easy challenges and made it simple for participants. Mr. Naveen explained about Steganography and Network challenges. After explaining a few steps, they were able to understand and many participants started to solve on their own. We saw a lot of participants solve some challenges very quickly thus proving to us that they had learnt a lot in the past two days. 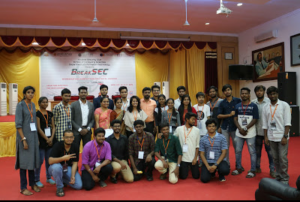 All participants were excited to take part in the challenges. Finally, the day was concluded with Valedictory ceremony and certificate distribution. Dr. V Ceronmani Sharmila, HOD-IT and Head-CNCD presided over the function. The CTF winners are – First Prize with cash prize of Rs.5000 was backed by students team from Jeppiaar Engineering College, Chennai and Sree Vidyanikethan Engineering College, Tirupathi, second prize with cash prize of Rs.3000 was won by team from Siddahtha Institute of Science and Technology, Puttur & Annamacharya Institute of Technology and Sciences, Tirupathi, third prize with cash prize of Rs.2000 was backed by team from St.Joseph’s Institute of Technology, Chennai, J.H.A Agarsen College, Chennai, Manakula Vinayagar Institute of Technology and complementary prize worth Rs.1000 was received by team from Hindustan Institute of Technology & Science and P.S.B.B. Millennium School, Coimbatore. The Certificates were given to the participants by the following guest – Mr.Siba Prasad Choudhury, Founder & Managing Director, Ms.Indu, Product Designing Head and Mr.Kaleel Ahamed, Product Developer, Tensys Innovation (OPC), Pvt. Ltd. Mrs. K.E.Dharani gave the vote of thanks, concluding the three day event.