The new premises of Center for Computational Brain Research (CCBR), Indian Institute of Technology Madras, was inaugurated today (20th May 2019) at Bhupat and Jyothi Mehta School of Biosciences (Building no 2) on campus. This dedicated workspace will house researchers and staff of the CCBR.

The CCBR at IIT Madras is a high-level research center dedicated to the goal of understanding the inner workings of the brain and using these basic principles to further enhance computer science. To achieve this goal, the center’s faculty work under the guidance of three chair professors: Prof Partha Mitra (Cold Spring Harbor Laboratory, USA), Prof Mriganka Sur (MIT, USA) and Prof Anand Raghunathan (Purdue University, USA). The center is funded by the generous contributions from Mr Kris Gopalakrishnan.

Addressing the event, Prof. K. VijayRaghavan said, “The CCBR is an example where a donor has partnered with the institute to take a new area of research such as brain research. There are new kinds of approaches being taken up here. I am sure the Center will do well and this will be an historic occasion. The best revolutionary changes in life sciences have come from partnerships between people from various disciplines such as engineering and biology, among others.”

Further, Prof VijayRaghavan added, “There must be a bottom-up demand for research. We must have a mass movement that appreciates the uncertainty of research and the need for research. This is what happens in other countries. One of the largest foundations in the U.K. that funds research is itself funded by contributions of one or two pounds given by the citizens. Science should not only be for the people but also by and of the people.” 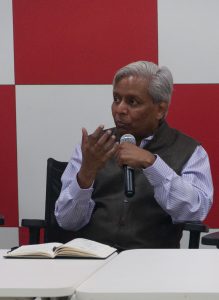 The impending saturation of exponential improvements in computer hardware and the rapid growth of machine intelligence to cope with big data have led to a renewed engineering and technological interest in understanding how brains work. At the same time, technological advances have led to new tools for studying brains.

Thanking Prof Bhaskar Ramamurthi and IIT Madras for their continued support, Mr. Kris Gopalakrishnan said, “The principles of the CCBR can be rapidly scaled up across India. India has exceptional researchers and is capable of doing world-class research, provided some conditions are enabled. These include a critical mass of researchers, global collaboration, sufficient funding and publicity/branding to attract the best and brightest in India to join this research. We should put at least Rs. 200 crore to Rs. 300 crore each in about 10 centers for research in cutting-edge areas in India.”

The goal of CCBR is to explore the interface between Neuroscience and Engineering disciplines. A two-way interaction is envisaged, where an understanding of the brain can help drive significant technological advances, and in turn engineering tools can help analyze and probe neural circuits.

Speaking about the work underway at CCBR, Prof Bhaskar Ramamurthi said, “The CCBR was conceived of and funded by Mr. Kris Gopalakrishnan. Its Annual workshops have been going on very well, attracting top people in the field who have been interacting with IIT Madras students. We plan to build a large human brain imaging facility and we are building our own equipment for this purpose. Within five years, we will come out with some really good results and new knowledge that will be noticed and give a good fillip to our students who gain exposure to some state-of-the-art research.” 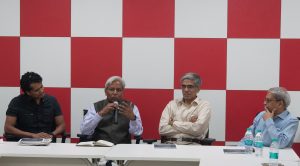 Providing an overview of the research underway at CCBR, Prof Partha Mitra said, “Work currently done by the center includes development and application of data analytic and informatics tools for exploring brain structure and function. The center collaborates with other institutions across the world including Johns Hopkins University-USA, Harvard Medical School-USA, The University of Melbourne- Australia, KTH- Sweden, in addition to the host institutions of the Chair Professors.”

Future goals of CCBR includes research activities to map human brain connectivity architecture at light microscopic resolution and the development of a brain-inspired neuromorphic chip for efficient computing. CCBR also intends to provide training and guidance to future engineer-neuroscientists in India. Towards this goal, it has started a winter course on Machine Intelligence and Brain Research, which is currently being offered to IIT Madras students for credit.  CCBR is currently planning to expand this to an online course that is accessible to a broader audience.

This includes the analysis of big data sets related to whole brain measurements of neuronal connectivity and activity, the development of new technologies for data acquisition, and the theoretical understanding of these data to derive underlying principles

This includes research into improving hardware efficiency (speed and energy consumption) based on insights from studying neural circuits, developing next generation algorithms, software and hardware for machine intelligence, and improving the robustness and programmability of software systems.