Celebratory atmosphere ruled the roost on Velammal Matriculation Higher Secondary School on 30 October when its student dedicated his title to Sujith Wilson, the two year old boy who tragically lost his life after getting stuck in an abondoned borewell.

R.Praggnanandha, the 14-year-old grandmaster was felicitated for winning the world chess title on 30 October on the school premises, that was when he dedicated the title. It is interesting to note that Sujith recently became World Youth Chess Champion. 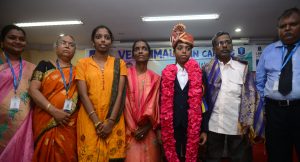 Soon after the chess player dedicated the title, a two-minute silence was observed and candles were lit as students and faculty members offered their condolences to Sujith’s family.

A giant human chess board comprising  the  face masks of Praggnaanandhaa and  Sujith Wilson was also on display. A cake cutting ceremony was organized for the chess wizard. The Interact  session on ‘Praggnanandhaa’s journey to success inspired the students.  The interact session highlighted the little master’s journey to success.

A ‘dare to win’ challenge was  organized where the best players contested with the  world champion.