Indian Coast Guard (ICG) is always there to lend a helping hand at the time of distress. This has turned true once again. ICG saved six precious lives at sea while undertaking a search and rescue operation about 70 nautical miles off Cape Comorin.

According to sources from Defence Ministry, Indian Coast Guard Ship ICGS Aadesh while on patrol in Gulf of Mannar was diverted to render assistance to fishing boat El Sahadai with six crew members onboard. 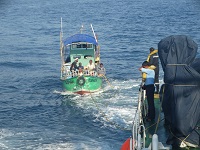 The boat from Tamilnadu was crippled at sea due to defects in engine’s clutch assembly since 17 November. Maritime Rescue Sub-Centre in Tuticorin received the message of distress onboard of the boat late evening of 17 November.

Sensing the urgency of distress ICGS Aadesh was immediately diverted to proceed towards the area and undertake search and rescue. The ship reached the area at about 8:00 hours on 18 November and commenced search for the boat.

A Coast Guard dornier aircraft was also tasked to carry out a sea-air coordinated search for the stricken boat. Dornier sighted the boat at about 13:45 hours on 18 November and vectored ICGS Aadesh to her.

The crew attempted to rectify the defect in the clutch assembly, but the engine failed to start. ICGS Aadesh provided logistics support and also made arrangements for further rectification on the engine, however the attempts were in vain. 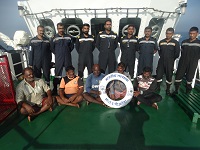 At about 16:30hours on 18 November, ICGS Aadesh commenced towing the boat. El Sahadai was safely towed to Colachel and reached Thengapattanam fishing harbour 9:30 am on 19 November.

The incident once again highlights the disadvantages of fishing boats venturing out alone. The fishermen are therefore, advised to undertake fishing in groups adhering to safe practices at sea and carry adequate lifesaving appliances and communication equipment onboard.

During this rescue mission,  Coast Guard officials of the Coast Guard district headquarters at Tuticorin were in constant communication with the boat owner and fisheries authorities.