They come, they see, they train

S Vishnu Sharma,  INN/Chennai, @infodeaofficial
The prowess of India’s military training has begun earning name and fame globally. The continuous presence of foreign cadets on Officers Training Academy (OTA) in Chennai is a testimony to this fact.
People from Afghanistan, Bhutan and many foreign countries have come here to have military training in the past. This has continued and now it is the turn of women officers from the Kyrgyzstan Army to get trained here for a duration of three weeks. A woman officer from the batch vouches for the high efficiency in military training in India.
‘Training provided to those who join the army here is praiseworthy,’ says the officer who is also impressed with training facilities for women cadets. The system for training women cadets is highly established here and this definitely deserves praise, said another officer. 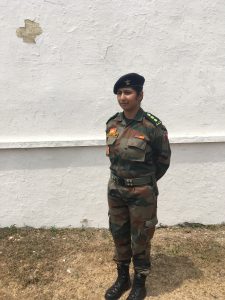 The women officers from Kyrgyzstan Army are across various ranks, says Captain Radhika Jaggi who was supervising the overall training programme for the women officers from Kyrgyzstan Army. These officers have a service record ranging from 7 to 17 years.
The three-week training programme for these foreign army officers is from 14 April to 4 May, said Major Prerak Joshy who imparted training in using weapons to these women officers. They were trained of using AK-47s, Insas rifle, paintball guns, grenades, and mortars, he said.
We witnessed training imparted to women cadets, we also took part in it, said a woman officer from Kyrgyzstan Army. Whatever we saw here will be told to the army authorities in our country. The information obtained here could be useful in bringing out an established system for training women officers in our nation, said the woman officer. 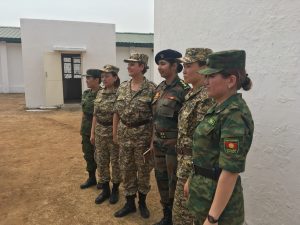 It is interesting to note that lady cadets from Bhutan were trained at OTA initially. Subsequently, cadets from Seychelles, Uganda, Maldives, and Afghanistan also started getting trained here. OTA has emerged as an international center of excellence for the training of Women Cadets and has trained 411 cadets from friendly foreign countries to date.
Share