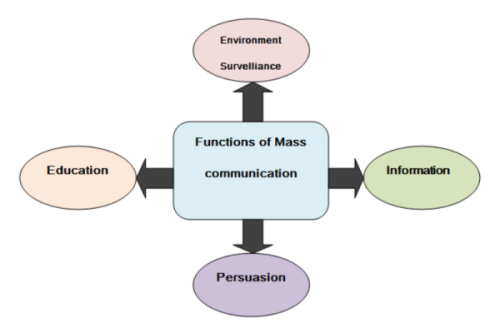 Mass communication involves the use of a medium as press radio TV to communicate with people and new media are internet related and as Facebook, Twitter, Instagram and others. Internet uses new media forms as social media like Facebook email to communicate to people as mass media have a powerful role to play in society although facing extinction on account of new media.
Mass communication play leading role in society as people know of many events because of media as an American professor Dr. WL Hagerman said some time ago as media have become entertaining informing educating effectively as Rogers and Singhal say. Today’s media change governments as Richard Nixon was a creation of Washington Post and it was responsible for his downfall. Today’s media purvey education as education is very strong in our generation as people go through education in many ways. People have not gone by religion or caste in many ways in India or America but education play a role as media emphasize strong education for means of improving ones’ income although other methods are in use as in eastern countries. Mass communication modernizes people as PM Modi is doing effectively in his term as PM of India as he seems to be a right person for ruling India again.
Mass communication plays a powerful role in informing educating entertaining people all and American media are found in other countries also as American films of James Bond and movies as the Deep were shown in Chennai many times. People watch movies with fun get entertained and do many works effectively on such basis as movies are mass communication agents as movies are on in every place. Although open toilet has diminished greatly Modi government used actor Vidya Balan to show Swach Bharat movement greatly in media. Movies and TV Shows play a great role as beauty and affluence are found on TV as Gerald Flannery a Professor of communication of University of Louisiana once said
Mass media play a role in health education also as some dreaded diseases come because of heredity or societal factors as cancer or cardiac arrests etc. as benign conditions conducive for family or harmony with nature do not exist in countries like the US or India and malignant conditions exist as a result some diseases as cancer is inevitable. During Obama administration, he signed orders or treaties with countries for cancer research and PM Modi should put right people to do such research. Media can exist or create awareness or inform people on steps to prevent someone not getting cancer etc. In this age, cancer is still preventable if adjust politics, cinema or society or human conditions as eastern bloc seem to have less of that disease.
Mass communication entertains people as TV serials and others provide more entertainment as today’s hot issues plaguing society are aired as Star Vijay a western-oriented channel airs indigenous characters opposed to what is considered beautiful as White is much reflecting Tamil Nadu’s people composition. Such steps are welcome as a family oriented actor as Prabhu son of Sivaji is featured in Kalyan jewelers advertisements etc. Cricket is still hot on TV as it was in yester years taking young and old alike into its fold effectively.