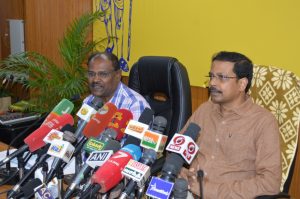 He was speaking after releasing a handbook on general elections to be held in Tamilnadu this year. The handbook also contains information on general elections held in Tamilnadu from 1951 to 2014. The book has been prepared by Press Information Bureau, Chennai. This extensive data would help to analyse the election process in India.
We are ready to conduct the elections if ECI asks us to do it. Election Commision is working to ensure 100 percent voter turn out.
We are uploading many inspirational videos and content on our social media profile to encourage voters to vote on polling date. Even noted personalities are being used to convey the message of need to vote to the masses.
Playback singer S.P. Balasubramanyam, actor Vijay Sethupati and other eminent personalities have given the message. Last Saturday we have uploaded a video, it attained a viewership of 40,000 by evening of that day itself, he said. We are confident of getting a good voter turnout, he reminded.
Share