The Government has handled the Migrants situation well in this Pandemic

When not only a country, but the whole world was suffering from the pandemic of a deadly virus, all the countries all over the globe had a challenge in front of them. All of them were standing at a bridge where one side of the bridge was a trench one side and river the other side. They had to choose between the trench of the economy or dealing with the river of covid patients. India chose to fall into the trench of the economy.

Though the country was in critical consequences our Prime Minister Narendra Modi dealt with it very nicely in every possible way. From the small needs to the big greeds, everything was handled and resolved at his best he could have done. But maintaining the best 1.3 million population of India was not at all an easy task. Solving a common public issue is a thing for the central government to solve, which they tried and even did at their best. But this pandemic situation was meant to work together by the country including the state government, central government, none ruling parties, and citizens of the nation.

With the great-great efforts of the government, Indian citizens, everything was controlled including providing the needies with the major requirement of food. But at a phase when the migrants were seen on the road worked as a black spot on the smooth working planning of the government.

Obviously, the reasons for migration were considerable but the deed was not.

Managing Migrants was a handshaking task, but it fell somewhere between the harsh situation of pandemic and providing basic needs to the majority. 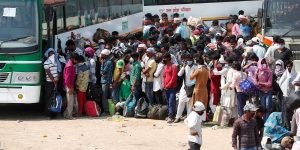 This situation should be handled by the state governments in hand with the migrants. Because resolving issues from each and every street of the country is not very much possible for the head central government. Expecting all the needs fulfilled by the government was a mistake, but putting their requirements in front of them and waiting for the result was something that should be followed. Though, the government should also have thought about the same from every view.

Every problem is managed in a particular way, step by step. This situation is somewhere similar to that of a situation when a child wants to buy chocolate, he will not directly go to the owner of the shopping mall, but he will ask his parents to buy him that, and then if they are denied to provide them with the same they have a right to take a stand and ask the owner for their help. A particular procedure should be followed to solve any situation. A child wanting chocolate is not wrong anywhere, but if he starts screaming and shouting for chocolate without even asking his parents to buy him is wrong.

The system works well only when all the small parts come together to make it perform well, cooperating with each other, imposing their responsibilities on each other, and at last at the system head who is already working to manage the system and system relations with other systems is not at all fair.