As we all know that India is slowly on the ledge of becoming a developed country. There are many projects which are going on and being planned for the coming future and will also make India in the list of developed countries.

India has also emerged as the most attractive global market for Clean Energy and maintains and self-reliance in the electricity component of centers ‘Atma Nirbhar Bharat’ campaign.

The country has launched a 750 MW  solar project in Rewa Madhya Pradesh through video conferencing. The Prime Minister also said that the state will emerge as a major hub for clean and cheap power in the country.

Solar energy sure, pure and Secure, and it is also said that the country is now among the top five solar power producers in the world. The Rewa Solar Power Plant will not only supply power to Madhya Pradesh but also to the Delhi Metro.

Rewa Ultra mega solar (RUMS) project is Asia’s largest such power facility and Delhi Metro will be one of its institutional customers outside the state. It is also being said that self- reliance on electricity is integral for ‘Atma Nirbhar Bharat’, Solar energy will play an integral part in achieving this objective. 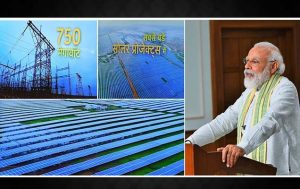 The whole world is on some kind of confusion whether to focus on the environment or on the economy, however, India has been secured in telling the world that the environment and economy are not at odds, but are complementary to each other.

The country has also successfully demonstrated this in executing programs like Swachh Bharat Abhiyan, LPG connections to the poor under the Ujjwala scheme, CNG, and electricity-based transportation, among others.

Solar energy will be a major source of power in the 21st century is Shor was the sun would Shine throughout the world,  solar energy is also known as the purest form of energy and with the help of this, there will be e less pollution in the environment as compared to the current scenario, as it also replenishes the energy.

India is also planning and working on many other projects recently the world’s second-largest data center has been constructed in Panvel Navi Mumbai (Maharashtra).