Indians entombed in Muscat are back to their home land 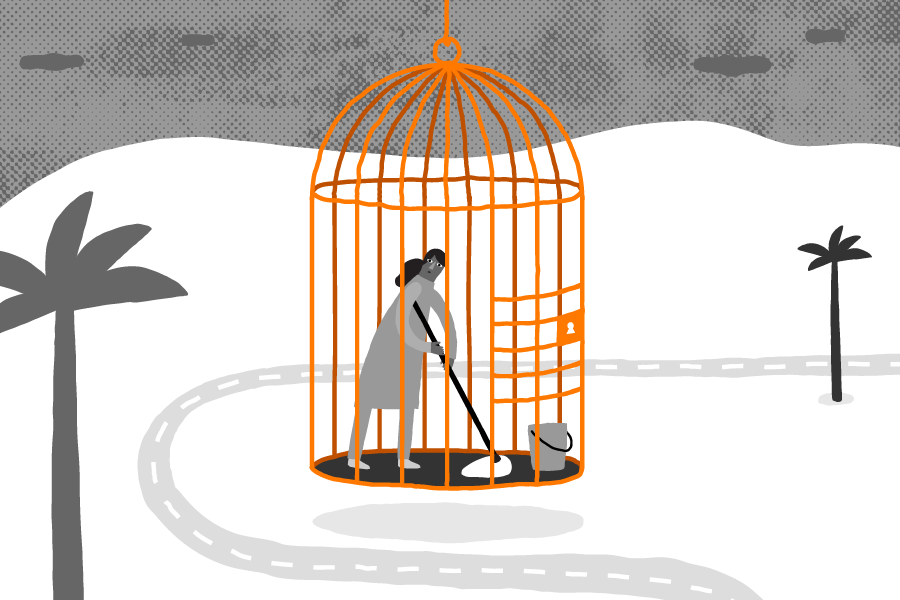 Media not only essays the role of the fourth pillar of our democracy quite adeptly but also fully deserves to achieve the title of the watchdog of our society.

A month ago, a vernacular media came across a dreadful situation faced by the Indian workers from Rajasthan, Andhra Pradesh and Telangana who were without any solid reason being tormented in Muscat, Oman and decided to report the matter. When the said member of the media along with the whole team decided to investigate the situation a bit more they came to know that the workers had been misled and tricked by job agents from Al Ramooz, a Muscat based company which offered them employment for works such as carpentry and labour. What’s more is that despite having all their necessary documents those workers couldn’t even return back to their nation as their passports were seized by the company. 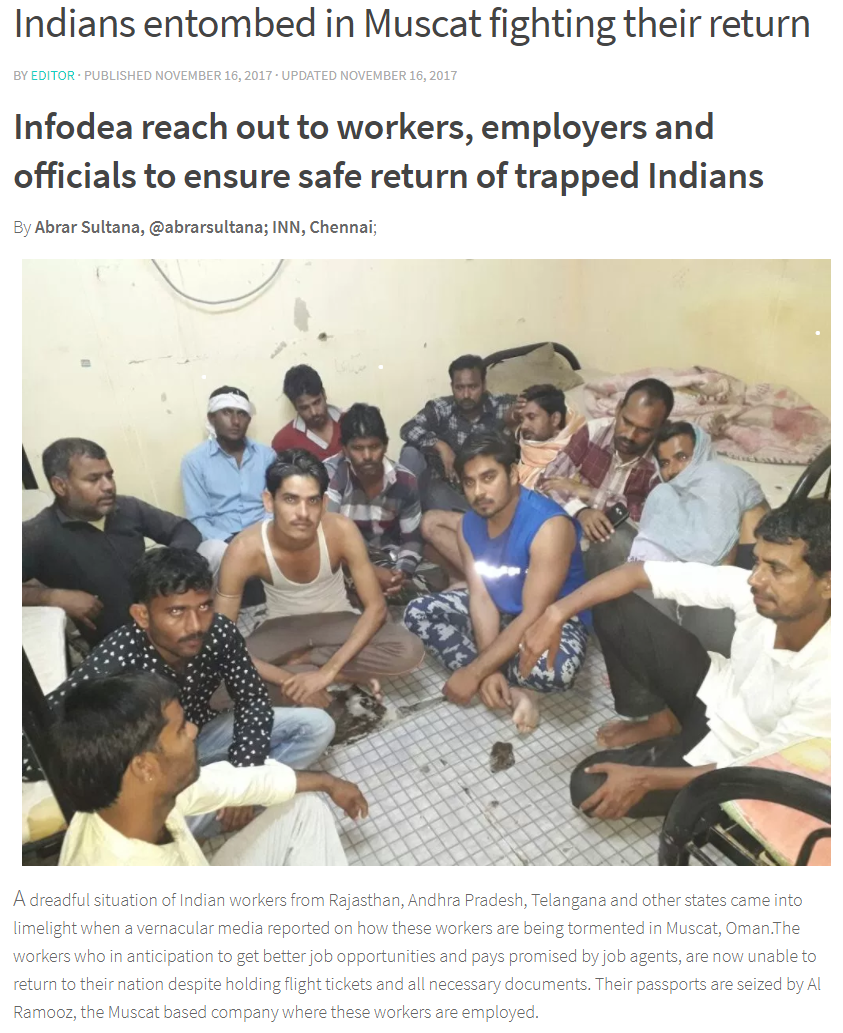 It was when the Infodea team came to know about this problem of the workers they had a go at reaching the company, which resulted in the company resorted to various methods for torment, that is, by putting the labourers in various camps to make them inaccessible for help. The Indian Embassy was also made aware of this issue but as time flew by there was no action from the authorities concerned on this very serious issue plaguing the entire scenario. Yes, they had reached out to the company and probed for immediate action for the safe return of the workers but there seemed to be quite a long pause taken by the embassy in solving the issue.

Nevertheless it was the adherence of the whole Infodea team who worked for the safe and timely return of those workers of Andhra Pradesh and Telangana. They contacted the Embassy quite a few numbers of times via calls and emails but unfortunately the Embassy authorities did not return to any of the queries. So, the media set the task upon themselves to bring those stranded Indians back to their Country and tirelessly worked for it. And indeed their hard work paid off really well, as within a week of  publishing a story about the Indians entombed in Muscat, they all came back!

The publishing of the story was an uphill battle fought by team Infodea along with the other vernacular media sources who managed to maintain continuous contact with the family members of some of the workers collected all the necessary and important information needed to get to the bottom of this issue at the earliest. They remained in continuous touch with Embassy officer too. Their efforts were duly appreciated as the officials from Mr P.P Chaudhary, Union State Minister’s office assured to take immediate action in resolving this issue. Also later on tweeted about their concerns regarding this issue and the lack of action taken by the Indian embassy, to help the workers to the P.M.O; the Foreign affairs minister Sushma Swaraj along with the Minister of State for external affairs V.K. Singh requesting them to address this issue at the earliest opportunity. And, surprisingly there was immediate response from the Ministry too. It assured every help possible to reach those stranded in Muscat. 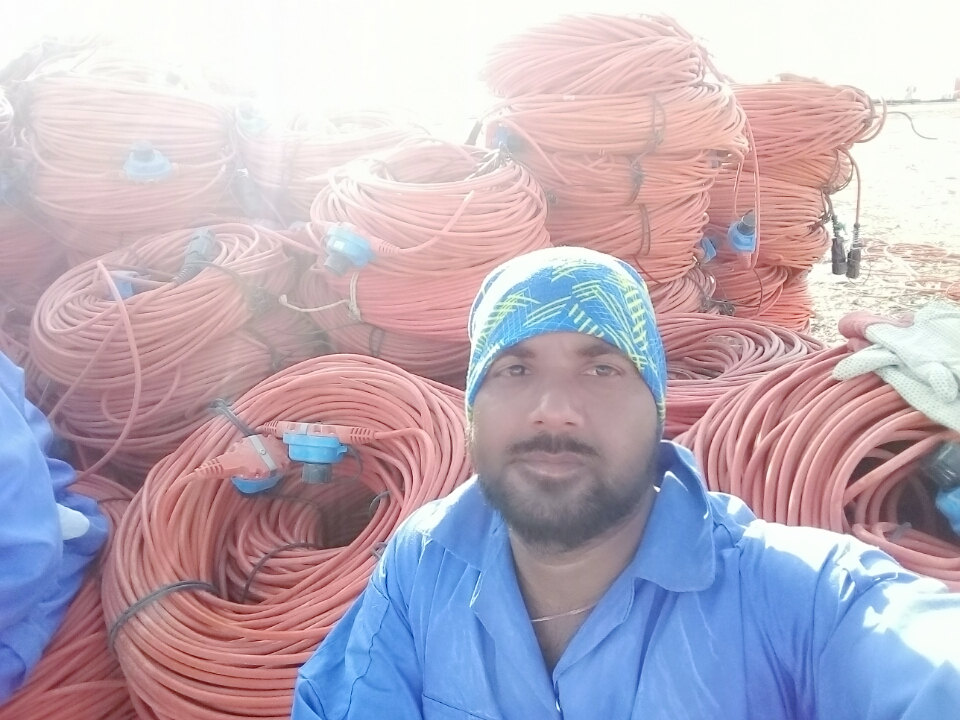 “The embassy did nothing except for providing us food for a month…that too didn’t last long….. When we took the help of Infodea team and they published our story the company totally came upon us and started raising invalid allegations saying that whatever we have done is against the law. They kept forcing us to make a “sorry” video aimed at apologising our actions to turn towards infodea for help as the company’s name was being demeaned. I along with all those people there am very much thankful for the efforts the media put forth to help us return back to our homeland if it weren’t for them we’d still be rotting there without food, shelter and money, we are very thankful to the media for coming to our aid, it is because of them that we had a very fast and safe return home without encountering any more problems….” – Kaluram

One of the stranded Indians expressed his thoughts when asked about his whole ordeal there.

Though he still hopes and wishes that the rest of the 100-150 people still entombed there to return back safely as he knows that their situation is no better than what he and his fellow workers faced.

Nevertheless contrary to what the workers say the embassy did not totally step back from helping them yes, it was a little too lethargic at first when approached, to take an initiative towards helping them but on the other hand when it comes to the claims made regarding the money related issues by the workers and the embassy that is either still a mystery to be solved or a secret to be discovered.