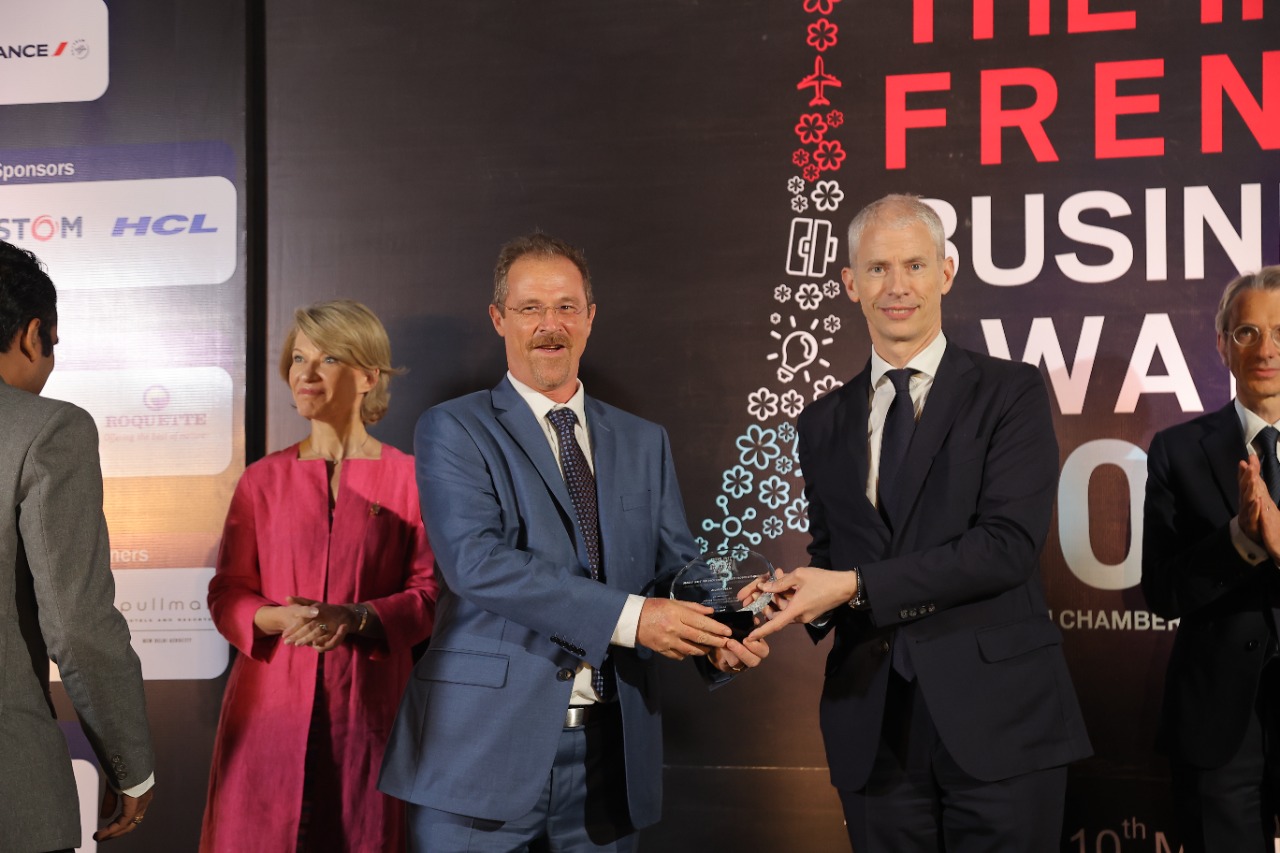 The Indo-French Chamber of Commerce & Industry (IFCCI) organized the 4th  edition of its flagship event, the Indo-French Business Awards (IFBA) in the presence of Mr. Franck Riester, Minister for Foreign Trade and Economic Attractiveness, attached to the Minister for Europe and Foreign Affairs, and under the patronage of the French Ambassador, H.E. Mr. Emmanuel Lenain. The award ceremony gathered business leaders from the most prominent French companies in India across sectors like Aerospace & Defence, Mobility, Energy & Consumer Goods to name a few, in a seated formal business dinner. 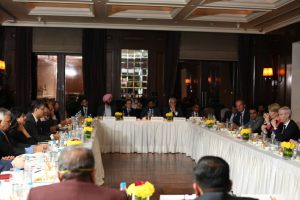 The Indo-French Business Awards announced 12 categories for which 100+ applications were received from all over India and France. The maximum number of applications received were for Best French Group & Most Innovative Product/Service category which reinforces the fact that French companies were able to bounce back after the Covid-19 crisis. Despite challenges in terms of multiple Covid waves and wavering industrial trends, the Indo – French trade has risen to USD 10.75 billion in 2020 and bilateral trade between the two countries has reached USD 8.85 billion in 2021. 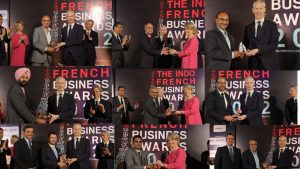 IFCCI also launched IFCCI CEO’s Committee on this same day in the presence of Mr. Franck Riester, French Minister for Foreign Trade and Economic Attractiveness  and H.E. Mr. Emmanuel Lenain, French Ambassador to India with an aim to build a platform which has high intentions of doing sustainable and development based business in India. The IFCCI CEOs delegation comprises of 80+ CEOs from all across India representing the biggest Indo-French companies of India. The platform aims to share knowledge, thought leadership and structured approach to strength Indo French trade corridors.

The previous edition of IFBA was graced by Mr. Nitin Gadkari, Hon’ble Minister for Roads, Transport and Highways and MSME and attended by business leaders from the most prominent French companies in India across sectors like Aerospace & Defence, Mobility, Energy & Consumer Goods to name a few.

With more than 1,000 French establishments already present in India, France has a cumulative investment of USD 9.86 billion from April 2000 to June 2021 representing 1.80% of the total FDI inflows into India. Similarly, there are around 200 subsidiaries of Indian businesses established in France employing more than 6,000 people. There are more than 1000 French establishments (ranging from MNCs to SMEs) present in India and for new entrants, it is the priority investment destination. A major indicator is that 39 of France’s largest, publicly traded companies on the Euronext Paris (CAC 40 as they are called) have operations in India. 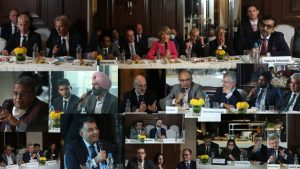 Speaking at the event, Mr. Franck Riester, Minister for Foreign Trade and Economic Attractiveness, said “I was glad to present the 2022 IFCCI business awards and impressed by the dynamism of the Indo-French business community. Despite the pandemic, French companies have continued to invest massively here, showing strong confidence in the Indian economy and its amazing potential. Today, there are more than 600 French companies in India with more than 350,000 employees. Thanks to their world-class know-how and long-term commitment to India, French companies are perfectly positioned to support India in its urban, ecological and digital transitions.”

Mr. Sumeet Anand, President, Indo-French Chambers of Commerce & Industry said “This edition of IFBA in the presence of the hon’ble minister reaffirms France’s commitment to the comprehensive Indo – French strategic partnership, within which the economic relationship is now core and of growing importance, relying on a strong foundation of trust and mutual admiration. The ties between India and France are on an upswing in the last few years with cooperation witnessing a significant expansion in key areas. The areas of defence and security, civil nuclear cooperation and trade and investment constitute the principal pillars of the Indo-French strategic partnership. French companies are increasingly investing in India across several sectors in technology, industry and services as well as agro based industries, as India has shown its resilience and resurgence through the global pandemic. More Indian investors are choosing to cross the Channel and make France their base for a better access to the EU market”. 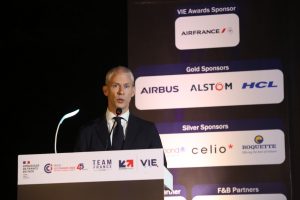 Ms. Payal S. Kanwar, Director General, Indo-French Chamber of Commerce & Industry said “We are delighted to witness the 4th edition of IFBA in IFCCI’s 45th year where we honour & felicitate those who contribute massively to Indo-French trade and business. IFCCI has an ambitious plan for 2022 and we will soon be opening an office in France to build a strong two way corridor.”

Furthermore, France is one of India’s largest scientific partners, with over 25 French R&D centers, 15 joint Indo-French research laboratories and 500 collaborative projects in the country. France has also emerged as India’s trusted Defence and Strategic partner. The European leader is also partnering with India to develop Chandigarh, Puducherry and Nagpur as smart cities with a commitment of over USD 2.2 billion for the latter’s smart cities project. India and France are also in the field of renewable energy cooperation towards development of technological know-how and thereby aid the process of attaining the ambitious target of 450 GW of installed Renewable Energy capacity by 2030. 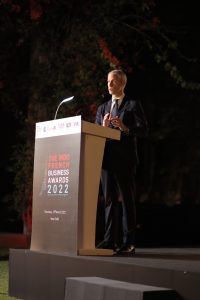 The winners of the 12 categories were awarded by Mr. Franck Riester, Minister for Foreign Trade and Economic Attractiveness, attached to the Minister for Europe and Foreign Affairs & H.E. Mr. Emmanuel Lenain, Ambassador of France to India. The awards Jury comprised of highly recognized Indo-French business leaders from the Embassy of France and IFCCI’s Governing Council comprising of CEOs from various industries.

Mr. Franck Riester, French Minister for Foreign Trade and Economic Attractiveness  also spoke extensively about the Russia – Ukraine crisis in the IFBA 2022 Awards ceremony. He said that the actuality is very dense in France because of the war in Ukraine. He said that what is happening in Europe is dire. It’s a major crisis and is an aggression, from an authoritarian nation against a democracy. He further said that it’s a major crisis in Europe in terms of defence issues, since the second world war in Europe & many Ukrainian civilians are dying each day due to the aggression of President Putin. he said that it is a very unacceptable aggression. Th hon’ble minister added that the relationship between France, Russia and Europe and their people is very dense, but what is happening is unacceptable and France is united with Europe and many countries involved to stop Putin’s aggression. He said that France is very worried and has decided to put many sanctions to put pressure on Putin to stop the aggression and that as he speaks here , a summit is being organised with French President Emmanuel Macron and the 27 countries of the EU to talk about the situation & the strategic autonomy of Europe and how to tackle this major crisis.He said “ It will have major consequences in different fields both in the short term and long term. This crisis has come as an addition to the Covid 19 crisis and is accelerating the need for Europe and France to rethink its value chains and supply chains.” He also spoke about building a more adapted environment for business in France, open market  and free  trade agreements and geographical indication protection agreements with India which he also discussed with Hon’ble Minister of Commerce & industry,  Mr.Piyush Goyal also. He added that France is the country in Europe hosting the more foreign investments than Germany and  UK and is very investor friendly.