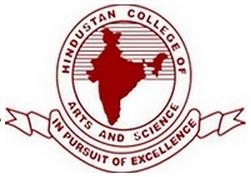 Hindustan College of Arts and Science celebrated the 72nd Independence Day in a grand manner. Retired Assistant Commissioner of the Police Mr. J. Lloyd Chandra, hoisted the national flag as he and the school’s Principal Dr. S. Thirumagan watched the grand march performed by NCC and NSS students. The program started at 8.30 am at HCAS Campus Padur that were attended by the faculty staff, students and bystanders.

The event started with the singing of Thamiz Thai Vazhthu followed by the welcome address of the Vice Principal Samuel Sampath Kumar.  He said in his welcome address that “we have crossed 71 long years since achieving the independence of India under the leadership of Nehru for our way of life and culture”.  We should reunited and recall the sacrifices made by freedom fighters who made the independence of  India from British rule a possible one.  He recalled vividly the horrors of the past in Andaman jail where freedom fighters were lodged and who had to undergo great measure of hardship before dying as 95 or so died in cells.  India made progress since then and we should  not forget the British rule and let us stay united in tri color and work for progress as he ended.

The Chief Guest Mr. Lloyd Chandra in his address said  he is not as a good orator and recalled India got independence during midnight.  As he spoke of three periods since independence, first one being 1947-77  a good one and after that people started looting.  He went to USA’s Mayo Clinic which had all the facilities and a good impression of it, as one should not become addicted to drugs as he saw a person going to jail on account of it. We should become a developed nation and exhorted everyone to work hard in free India to achieve its goals.  He then distributed certificates to NSS students who attended work shop on drug abuse.

In his felicitation address Dr. S Thirumagan said, it was nice to having the chief guest as Mr. Lloyd Chandra and we should salute him.  The Chief Guest has served the TN police department in honors and seen many challenges and praised NCC and NSS volunteers for the march and ably done. And followed by culturals coinciding by Bharatanatyam danced by the students while teachers sang the song as it ended.  Mr. A Amul Lourdaraj a member of  faculty proposed vote of thanks, thanking everyone for making the occasion a success. 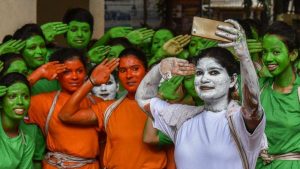