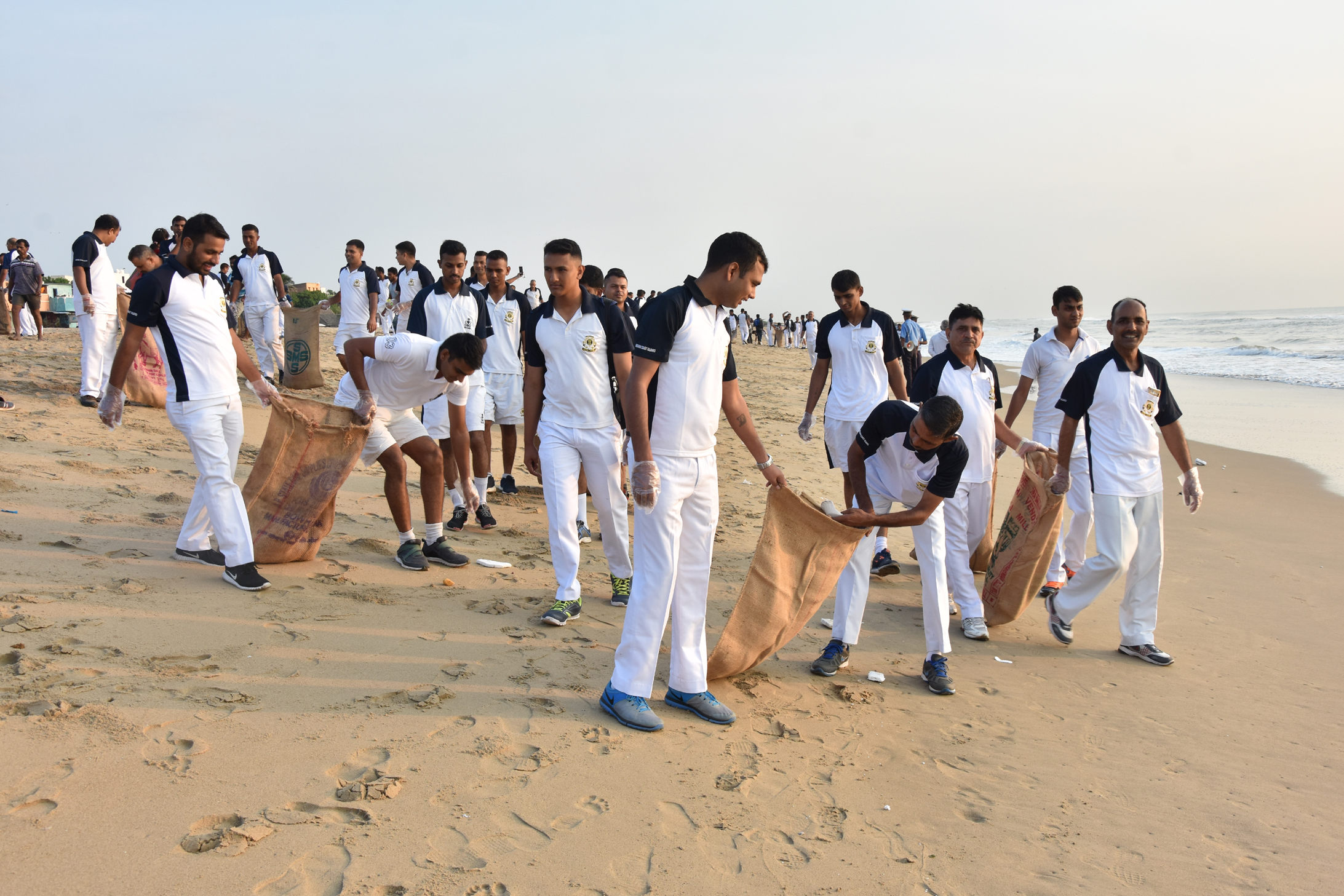 Takes up cleaning drive in the city

What else can be better other than a cleaner atmosphere around us. It is perhaps taking this point into consideration that Indian Coast Guard had taken up cleanliness drive at Elliots Beach in this city. The cleaning drive was taken up from 6:30 am to 9:00 am on Saturday. The theme for the event was ‘Harnessing the power of people to fight Ocean Trash.’
During the event about 1280 volunteers from various units of Coast Guard, NIOT, State Fisheries department, Local Army Units, Port Trust, Local Police, NGOs and students from various schools, colleges took part in it. The event began after being flagged off by Inspector General S Paramesh, TM, Commander Coast Guard Region(East). The Inspector General emphasized on keeping our coastal areas, specially the beaches, in a clean and hygienic condition.
He also extorted the gathering to exercise self-restraint in the usage of plastic and non-biodegradable items and its scientific disposal.During the cleanup drive 4300 Kgs of non-biodegradable waste were collected and handed over to the municipal authorities for proper disposal. This opportunity was utilized to create awareness on environmental protection and proper disposal of waste amongst the local populace and students.
The data collected would help to keep a track on the types of debris commonly found at Chennai beaches and assist the government in formulating policies to reduce them. The Oceans have been treated as a convenient dumping ground for the manmade waste generated all–round the globe and the marine debris collected from the oceans indicate that majority have emanated from the land sources which are non-biodegradable.

The debris have caused catastrophic effect on the marine flora and fauna as the marine animals get entangled with the floating plastic bags and other debris. In order to prevent dumping of waste into the ocean and to sensitise the coastal population regarding the conservation of the oceans, the International Coastal Cleanup (ICC) was started as a part of UN Environmental Programme Initiative in 1986 to engage volunteers to clean the oceans and to create awareness amongst the local population.

Accordingly, the International Coastal Cleanup Day is celebrated worldwide during the third week of September every year to generate awareness for the conservation and protection of marine environment. The beach areas frequented by the public for recreational purpose are being littered by various types of non-degradable waste like wrappings, disposable plastic bags without realizing that this is affecting the health of the coastal seas and the associated marine life forms.
Each year as a token of realization that earth, its sea areas and coastal surroundings are ours and it is our responsibility to preserve them for our use and for posterity, Coast Guard organizes coastal clean-up day.
The Indian Coast Guard, an Armed Force of the union, is responsible for safe guarding the national interest in the maritime zones of India and their natural wealth. Accordingly, the service has been undertaking various programmes for kindling the interest of public in general and fisher folk in particular by undertaking awareness programmes on environment conservation issues.