Raj Bhavan will fund for the new kitchen which will be built by Akshaya Patra Foundation, said Governor of Tamil Nadu Banwarilal Purohit. He was speaking at the 11th annual Sri Krishna Balarama Ratha Yatra organised by Hare Krishna Movement Chennai.

The kitchen would be used to prepared breakfast for around 12000 children in schools run by Greater Chennai Corporation. Speaking further, Governor said life and achievements of Srila Prabhupada, the founder Acharya of worldwide Hare Krishna Movement should inspire all sections of the society world over to take up Krishna consciousness as a concrete plan of action in their daily lives. 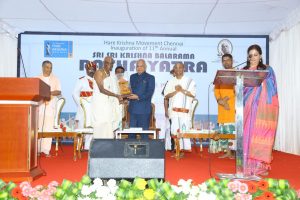 Dushyanth Shridhar, the guest of honor stated that it was fitting that this ratha yatra started from Besant Nagar, which was graced by the Mahalakshmi temple and finally arrives at Thruvanmiyur, a place where sage Valmiki had done tapasya.

Chanchalapati Dasa, president, Vrindavan Chandroday Mandir remarked that Srila Prabhupada was the only acharya to take the festival of chariots all over the world.

Ratha yatra began at Elliots Beach in Besant Nagar with an inaugural ceremony and it passed through the streets of Besant Nagar, Indira Nagar and Thiruvanmiyur, giving an opportunity for devotees in these localities to have darshan of the deities of Lord Krishna Balarama and Nitai Gauranga. The festival ended with an arati at the Hare Krishna Movement Chennai in Valmiki Nagar, Thiruvanmiyur.