Here is a fans club for Indian Army 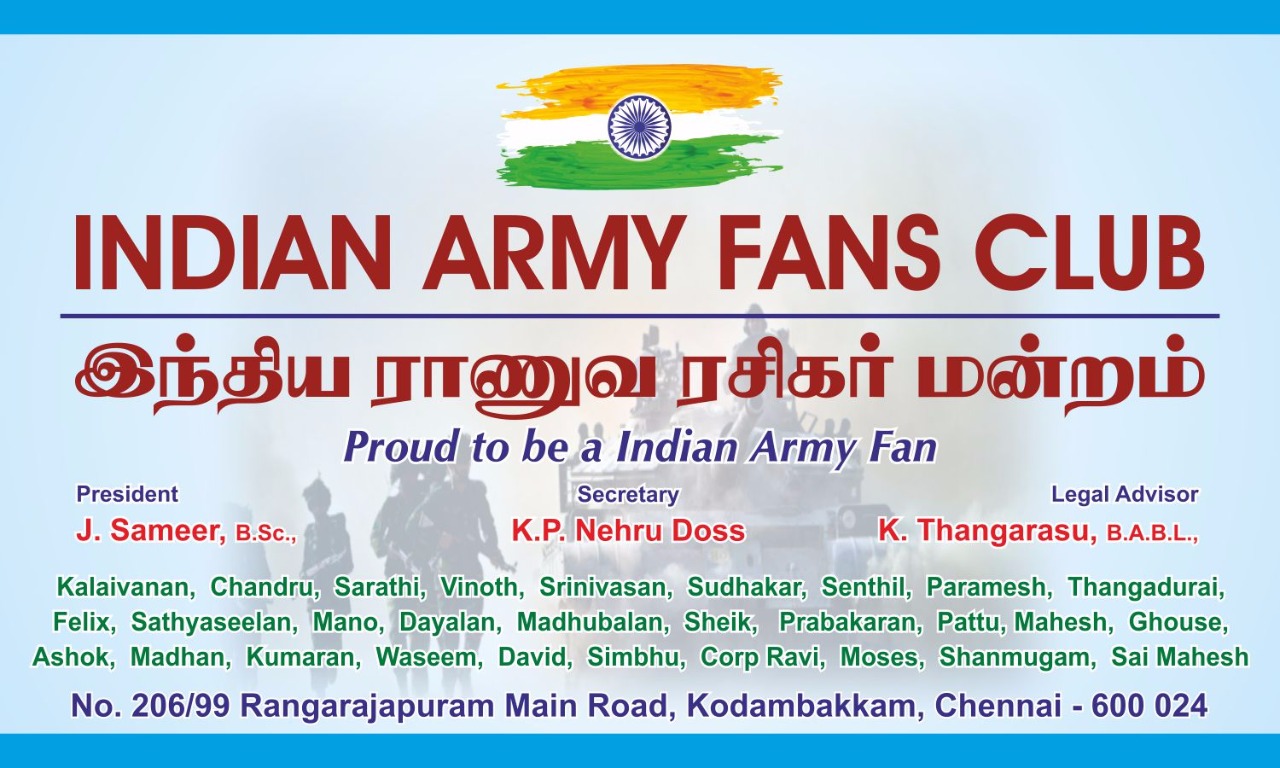 They are for honouring our soldiers 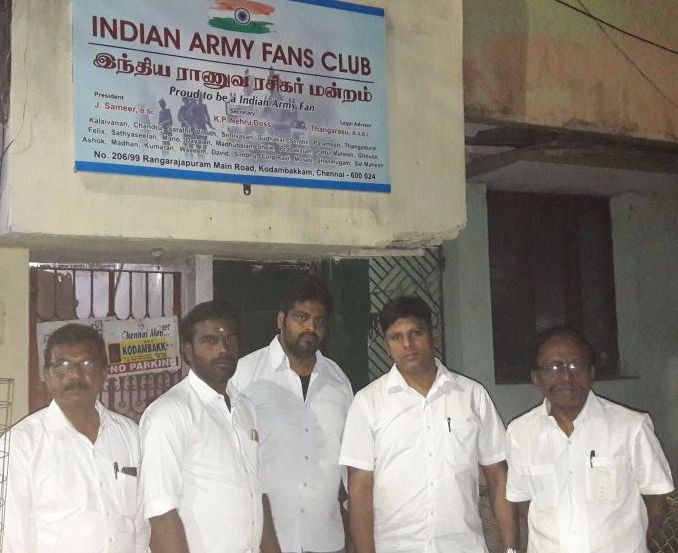 It is common to hear about fans club for cine heroes or film heroines, but one rarely comes across a club that admires our heroic soldiers who save our nation braving all odds.
Talking a walk on Rangarajapuram Main Road at Kodambakkam will put into one’s eyes a board at the entrance of a house that will attract your attention and arouse your curiosity. It reads ‘Indian Army Fans Club.’ The credit should go to J Sameer and his friends who came together to establish the fans club.
The idea of starting the club first pounced in the mind of Sameer who is also its president. ‘It all began in January this year,’ he said when News Today met him at the club premises recently.
The idea was to start a fans club for those soldiers are real heroes as they stand for the nation braving all odds. They are the ones who need our salute for their great work, he reminded.
The idea was to start a fans club for our army and also taking up social service activities in the name of the club as it will also bring a good name to our soldiers, he said. And work for establishing the club began after that.
However, his love for Indian Army dates back to his childhood. He even made an attempt to join army. He could not realise his dream of joining army as he had to focus on supporting his family due to the death of his father.
Admiration for the olive green uniform personnel continued to remain strong and this lateron culminated into the idea of starting the club, he reminded. ‘After discussing my idea with the friends in June this year we went ahead with the implementation.’
After getting permission to start the club from Colonel Vineeth Prabhat it was proposed to be started on 15 August. ‘But we chose to inaugurate it on 28 September this year as army personnel were not available for inauguration on our Independence Day.
We also felt 28 September is an apt date as it happens to be the birthday of freedom fighter Bhagat Singh, said secretary of the club K P Nehru Doss.’ The club was inagurated by army officer G D Naidu.
Distribution of tea, coffee, food, raincoats and umbrellas to people affected by recent rains, conducting of medical camps, conducting awareness talks on Indian Army in government schools are some of the service activities done by us on behalf of the club.
We have already done awareness speeches at Corporation School near Ram Theatre and Pathipaga Chemmal K Ganapathy Government Higher Secondary School on Arcot Road, said K Thangarasu, the club’s legal advisor.
The idea behind this is also to motivate the students to take up career in Indian Army. Vice President of the club S Srinivasan said their next idea is to conduct a blood donation camp on 15 January next year on the occasion of Indian Army Day and give it to army hospital. We are also planning to start free tuition for needy children.
The club has 100 members now, while their Facebook page has a membership of 1500. We are getting requests for membership from other parts of the country too like UP, Bihar, Odisha.
Service of Indian Army in Siachen Glacier is what the club members admire the most. It is impossible to withstand frosty temperatures, but our soldiers are doing it for the sake of this country, said Sameer.
While their admiration for Indian Army is strong, they have high regards for Navy and Air Force too. It is army that stands first when it comes to defending the nation, but Navy and Air Force too stand second to none in protecting this nation, said the club members. K Thangarasu can be contacted at 9840424428 and 9444022284.