Love story in Bollywood can get quite cliched but now it seems like Bollywood has dropped its obsession over the typical Raj-Simran romance. The perfect example of this is Shelly Chopra Dhar’s directorial debut ‘Ek Ladki Ko Dekha Toh Aisa Laga’, which is an Indian Bollywood romantic movie under the banner Vinod Chopra films, starring  Anil Kapoor, Juhi Chawla,  Sonam Kapoor and Rajkummar Rao as the key characters and features Akshay Oberoi, Regina Casaandra, Brijendra Kalaand Madhumalti Kapoor in supporting roles. The sound track was composed by Rochak kohli with lyrics written by Gurpreet Saini. 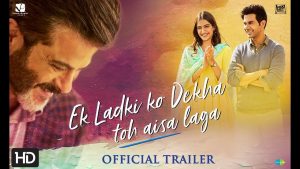 Sonam Kapoor, as Sweety, was seen playing the role of a lesbian who struggles to deal with her homosexuality and fears acceptance. Also, the South Indian actress Regina Cassandra marked her Bollywood debut playing the role of Sweety’s love interest.This film is the first mainstream Indian film to deal with a lesbian relationship. The film also features the first On-screen collaboration between real life father and daughter Anil and Sonam Kapoor. This film promised to be the “the most unexpected romance of the year”, since the film is about same sex relationships and with recent amendment of decriminalizing Homosexuality in the nation, the release of the film is perfectly timed.

The film revolves around a young Punjabi girl Sweety, who deals with her over-enthusiastic traditional family that wants her to get her married to a young writer Mirza (Rajkumar Rao) who falls in love with her immediately. However, Sweety is a lesbian in love with another woman. But  ultimately she fears the possibility that her true love might not find acceptance in her family and society. Later, it engages in much more sensitive issue of a girl feeling trapped in her own emotions. The part of a father (Anil Kapoor) supporting her daughter’s sexuality and emotions is touching.

In the context of film making traditions that has almost never been sensitive to LGBT rights, ‘Ek Ladki Ko Dekha toh esa laga’ has a very fresh and new-age story line. Though the pace of the film is a bit slow but it is pleasant to see that such unconventional themes are being highlighted by the mainstream actors. The film is simple enough but force the audience to think differently without loosing it’s main objective of entertainment.