Southern Railway convened a meeting with members of Parliament belonging to both Lok Sabha and Rajya Sabha pertaining to Chennai and Salem divisions on 9 September.

Sources from Southern Railway say that 27 MPs took part in the meeting which saw the participation of Southern Railway General Manager its principal heads of departments and divisional railway managers of Salem and Chennai. 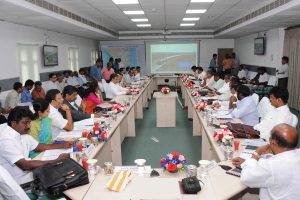 D.M. Kathir Anand, MP from Vellore and P.R. Natarajan, MP of Coimbatore (elected as Chairman of the Divisional Committee for Chennai and Salem divisions) were among the members of Parliament to take part in the meeting.